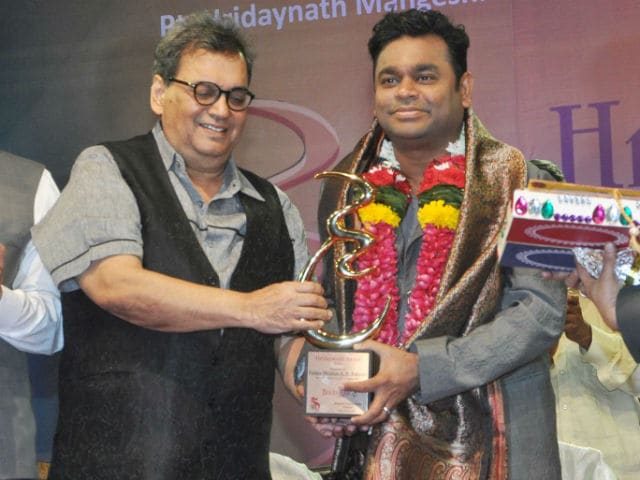 Subhash Ghai presented the award to A R Rahman.

Mumbai: Oscar-winning composer A R Rahman was honoured with the Hridaynath Mangeshkar Award here on October 26.

"The music of Hridaynathji is an inspiration," said Rahman.

Mr Ghai, who has worked with the 48-year old musician in Taal, said that Rahman is not only a celebrity, but he also has a beautiful soul.

"He didn't know Hindi or Punjabi but worked for 70 nights on the music of Taal and proved that he is the best musician. He is not only a big celebrity. He also has a beautiful soul," said Mr Ghai.

Hridaynath Mangeshkar said that Rahman has made the country proud with his outstanding contribution to music.

The first Hridaynath Award was presented to Lataji. Ashaji, Amitabh Bachchan and veteran actress Sulochana have also received this award in the past.

In 2009, Rahman won the Oscar for Best Original Score and Best Original Song, sharing it with lyricist Gulzar, for Danny Boyle's Slumdog Millionaire.

The composer has also won four National Awards in a career spanning over two decades.