A Pic Of Newlyweds Kajal Aggarwal, Gautam Kitchlu And Their "New Beginnings"

"My incredible wife and our new home," wrote Gautam Kitchlu 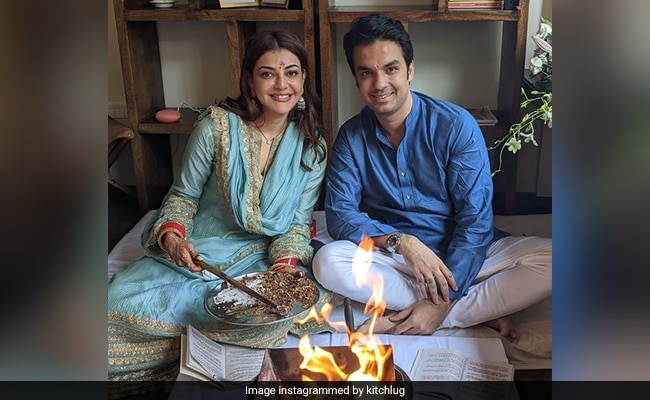 Kajal Aggarwal's husband and entrepreneur Gautam Kitchlu shared a picture of himself along with the actress on Wednesday morning. The picture appears to be from a puja. Sharing the picture from the couple's new house, Gautam wrote in his caption: "Celebrating new beginnings. So grateful for the blessings of the past week, my incredible wife and our new home." Kajal Aggarwal, in the comments section of Gautam's post, dropped heart emojis. Her sister and actress Nisha Aggarwal wrote these words in the comments section: "Lots of love to both of you."

Celebrating new beginnings. So grateful for the blessings of the past week, my incredible wife and our new home.

Kajal Aggarwal married Gautam Kitchlu on October 30 in Mumbai, in the presence of a few family members and friends. Just a few days after their wedding, Gautam Kitchlu shared a goofy albeit super cute picture of Kajal on his Instagram profile and he captioned it: "Waking up as Mrs Kitchlu." ICYMI, this is the post we are talking about:

Waking up as Mrs Kitchlu

The actress has been actively sharing pictures from her wedding festivities and they are a sheer delight. Take a look at their dreamy wedding pictures here:

And just like that, from ms to mrs! I married my confidante, companion, best friend and soulmate. So glad I found all of this and my home in you @kitchlug #kajgautkitched

In our Punjabi meets Kashmiri wedding, we just had to include #Jeelakarrabellam - a tribute to both Gautam and my individual relationships with South India! In a Telugu wedding, Jeelakarra Bellam signifies the union/marriage of the bride and the groom. Jeelakarra (cumin) and bellam (jaggery) are made into a thick paste and put on a tamalapaku (betel leaf). The bride and the groom put it on each other's head while the purohit chants mantras from the Vedas. The bride and the groom look at each other only after this ceremony is completed and this auspicious ceremony signifies that the couple will stay together in bitter and sweet times

Kajal Aggarwal, who made her made her Bollywood debut with Kyun! Ho Gaya Na, is best-known for her performances in films such as Singham, co-starring Ajay Devgn, Special 26, opposite Akshay Kumar and Do Lafzon Ki Kahani. She also has many Tamil and Telugu films to her credit. Her impressive line-up of films includes Mumbai Saga, Acharya, Mosagallu, Hey Sinamika, Paris Paris and Kamal Haasan's Indian 2.