"It wasn't a proposal with all of the jazz, but it was an extremely heartfelt, emotional conversation between us," Kajal Aggarwal said in an interview 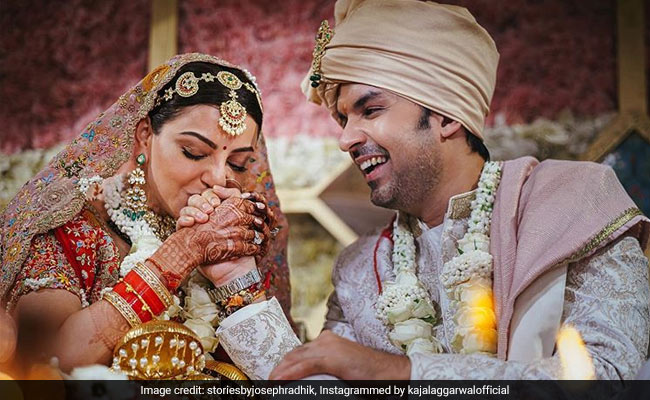 Newly-married Kajal Aggarwal spilled the beans on how Gautam Kitchlu proposed to her, their socially distanced wedding planning and more in an interview with Vogue. Kajal Aggarwal officially introduced Gautam Kitchlu to her fans for the first time with her wedding announcement, ahead of which little was known about her personal life. In the Vogue interview, Kajal revealed that they have known each other for 10 years and dated for three. Staying away from each other during the lockdown made Kajal and Gautam realise how much they wanted to be together - Gautam met Kajal's parents in April and proposed to her in June and she said yes.

Talking about the proposal bit, Kajal told Vogue that it was not at all "filmy" but still very special: "Gautam is understated when it comes to romance. He's not the filmy sort, and I am grateful for it because I have enough of that in my films. So, it wasn't a proposal with all of the jazz, but it was an extremely heartfelt, emotional conversation between us."

Kajal added that Gautam Kitchlu's words won her heart right away: "He was so authentic about his feelings and the way he expressed how he wanted to have a future with me; I couldn't be more sure about spending my life with him."

In our Punjabi meets Kashmiri wedding, we just had to include #Jeelakarrabellam జీలకర్రాబెల్లం - a tribute to both Gautam and my individual relationships with South India! ???? In a Telugu wedding, Jeelakarra Bellam signifies the union/marriage of the bride and the groom. Jeelakarra (cumin) and bellam (jaggery) are made into a thick paste and put on a tamalapaku (betel leaf). The bride and the groom put it on each other's head while the purohit chants mantras from the Vedas. The bride and the groom look at each other only after this ceremony is completed and this auspicious ceremony signifies that the couple will stay together in bitter and sweet times ❤️

Kajal Aggarwal and Gautam Kitchlu had a family-only wedding in Mumbai on October 30. Their wedding festivities were preceded by a haldi luncheon and a mehendi ceremony. Kajal and Gautam also had an after party with a limited guest list.