A Pic Of Both Miheeka Bajaj And Rana Daggubati From Haldi Ceremony. Enough Said 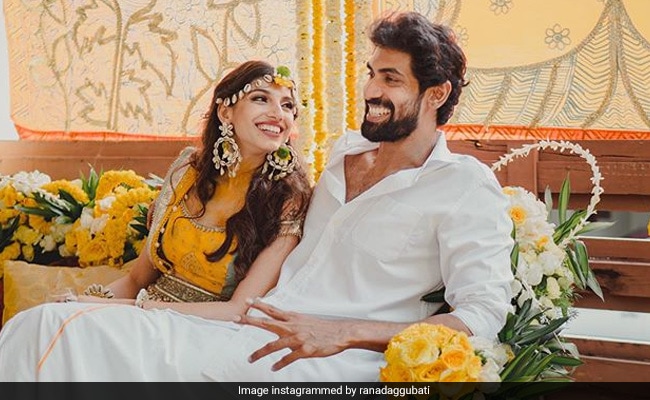 Just when we thought that pictures from bride-to-be Miheeka Bajaj's haldi ceremony couldn't get any better, we chanced upon a million-dollar photograph, also featuring her fiance and Telugu star Rana Daggubati. Sharing a stunning picture from the haldi ceremony on his Instagram profile, the Baahubali actor wrote: "And life moves forward in smiles. Thank you." The comments section of his post was instantly flooded with congratulatory messages for the couple. The photographs, which were also shared by fan clubs on Instagram, are spreading like wild fire on social media. In the pictures, Miheeka looked radiant in a traditional yellow and green lehenga, while Rana Daggubati complemented her in a traditional white outfit and a bright smile. The couple is reportedly set to get married on August 8 at Hyderabad's Ramanaidu Studios and their wedding guest list will include not more than 30 people.

Check out the pictures from the haldi ceremony here:

And life moves fwd in smiles :) Thank you

Besides the haldi, pictures from some more pre-wedding festivities are being shared on social media. The bride-to-be opted for a pink outfit and accessorised her look to perfection. See the pictures here, you can thank us later.

Rana Daggubati's father Suresh Babu spilled the beans on the wedding in a recent interview with the Times Of India and said, "There will not be more than 30 people present at the wedding. We want to limit the guest list to just family and we haven't invited even some of our closest friends, within and outside the film industry. The reality is that COVID-19 cases continue to rise and we don't want our celebrations to risk anybody's health, so I want to set the right example. The ceremony will be small but beautiful."

In May this year, Rana Daggubati and Miheeka Bajaj got engaged in a private ceremony in Hyderabad, which was attended by only a few family members. Here are the pictures: