Sara Ali Khan returned to Mumbai from Kashmir on Wednesday 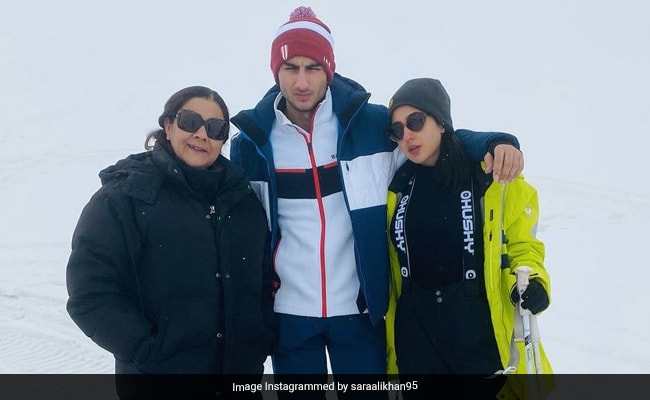 Filling up the pages of her Kashmir Diaries, actress Sara Ali Khan, on Thursday, shared new pictures from her recent trip to the "paradise on earth." The pictures are giving us major wanderlust. The 25-year-old actress had gone to Kashmir's Gulmarg for a holiday with her mother, actress Amrita Singh and brother Ibrahim Ali Khan. The family was also joined by few of their friends on the holiday. Among the multiple pictures that she posted on Instagram, one of the pictures feature her posing with Amrita Singh and Ibrahim at the top of a snow capped mountain in the valley. Another picture captures her posing with Ibrahim as they sit beside a bonfire during a cold night. Sharing the new pictures on Instagram, Sara Ali Khan wrote: "A little bit of paradise on earth, of people so wonderful there truly is a dearth."

The post also included a couple of videos that capture the breath taking view of the snow-capped valleys of Kashmir. The post of the young actress received a lot of likes and comments from her fans. They dropped heart emojis in the comments section of the actress' post.

These new pictures have come just a day after Sara returned from Kashmir. She was spotted at the Mumbai airport with Amrita Singh and Ibrahim Ali Khan on Wednesday.

Sara has been quite constant in sharing postcards from her Kashmir trip. Earlier this week, the 25-year-old actress shared a new video to her "Namaste Darshako" series. In the video, Sara and Amrita Singh could be seen taking a Gandola ride. While Sara was busy with her commentary, Amrita's expressions showed that she was scared to take the ride. Sara's hilarious commentary left the Internet in splits but the real show-stealer was her mom Amrita Sigh's expressions.

Last week, Sara Ali Khan had also shared a stunning picture of herself chilling on a snow bike on the snowcapped mountains of Gulmarg. The actress was not alone in the picture as her brother Ibrahim could also be seen posing with her in it.

In terms of work, Sara will next be seen in Aanand L Rai's Atrangi Re  co-starring Akshay Kumar and Dhanush. She was last seen in Imtiaz Ali's Love Aaj Kal starring opposite Kartik Aaryan. The film was released last year.