A Glimpse Of Katrina Kaif And Aamir Khan's Thug Life

Going by the photo shared by Katrina Kaif, she And Aamir Khan are preparing for a dance sequence choreographed by Prabhu Deva for Thugs Of Hindostan 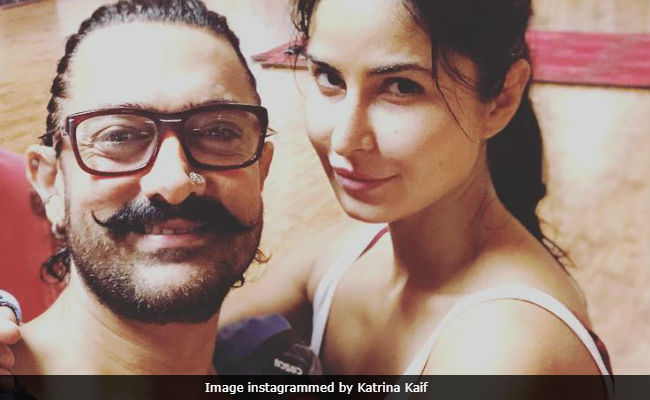 New Delhi: Katrina Kaif and Aamir Khan are busy with the preparation of their upcoming film Thugs Of Hindostan. Katrina, 34, shared a picture on Instagram, featuring herself, Aamir Khan and choreographer Prabhu Deva from what appears to be a dance studio. Katrina, everyone knows is a fabulous dancer and a meticulous artiste and by adding Prabhu Deva's tricky dance style to it, one can expected a Dhoom on the big screen. Aamir with his Thugs Of hindostan handlebar moustache and nose pin, is all smiles, sandwiched between Katrina and Prabhu Deva. Take a look at the picture here:

Katrina's last film Tiger Zinda Hai, co-starring Salman Khan, has been a huge box office success. The domestic box office collection of the Yash Raj Films-produced movie, which was made on a budget of Rs 150 crore, crossed over Rs 300 crore in the third week of its release, making it the second highest grosser of 2017.

Promoted
Listen to the latest songs, only on JioSaavn.com
Apart from Thugs Of Hindostan, Katrina is looking forward to the release of Zero co-starring Shah Rukh Khan and Anushka Sharma. The Aanand L Rai-directed film will release a month after Thugs Of Hindostan in December 2018.

Aamir Khan, who was last seen in 2016's Dangal, has not announced another film after Thugs Of Hindostan.
Comments
karina kaifaamir khanthugs of hindostan