A Day in The Life Of Ananya Pandey 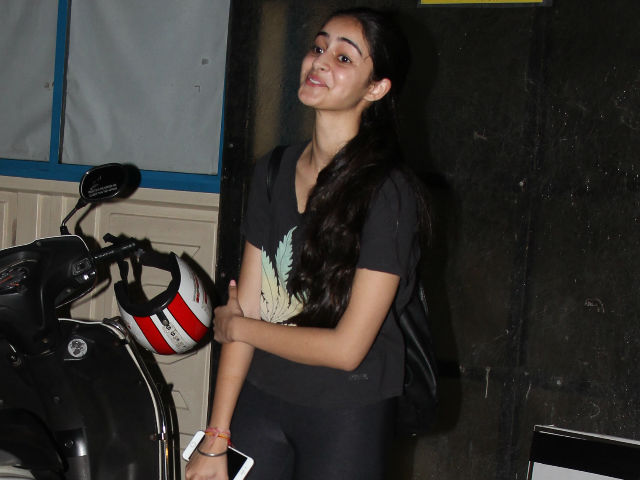 New Delhi: Chunky Pandey's daughter Ananya was spotted in Bandra, dressed in trendy gym clothes and with a pretty smile on her face as she met the paparazzi. Ananya is the elder of Chunky and Bhavna Pandey's two daughters - their younger daughter is Rysa. Ananya, 18, is from the league of most awaited star kids debut. Shah Rukh Khan's daughter Suhana and Sanjay Kapoor's daughter Shanaya are among Ananya's closest friends. As of now, Suhana, who wants to pursue a career in showbiz, is studying films in London. Anaya too has a promising debut to look forward to. Ananya will soon make her high society debut at Le Bal Des Debutantes or Le Bal.

Here are pictures of Ananya Pandey in Mumbai: Ananya Pandey has been selected to represent young Indian women along with Princess Gauravi of Jaipur at the annual charity gala, which is celebrated its 25th anniversary this year. For the event scheduled for November 25 this year, Ananya will wear Jean Paul Gaultier couture and Payal New York accessories.

Recently, Ananya Pandey featured in headlines after her mother Bhavna Pandey shared a picture of her on Instagram and Farah Khan commented: "Do a DNA test please. She's too lovely to be Chunky's daughter." Farah's comment put her, Ananya and Chunky Pandey on top the trends list. Fans of the Aankhen actor told off Farah for trolling him but Chunky Pandey took no offence. He told Hindustan Times it was a 'compliment.'

Here's the picture of Ananya which got her the top spot on trends list for two consecutive days:

Here's wishing Ananya Pandey best of luck for all her endeavors.