Actress Richa Chadha, who attended the screening of the film on Wednesday, commented: "Jeet gaye! Thanks for this historic film" 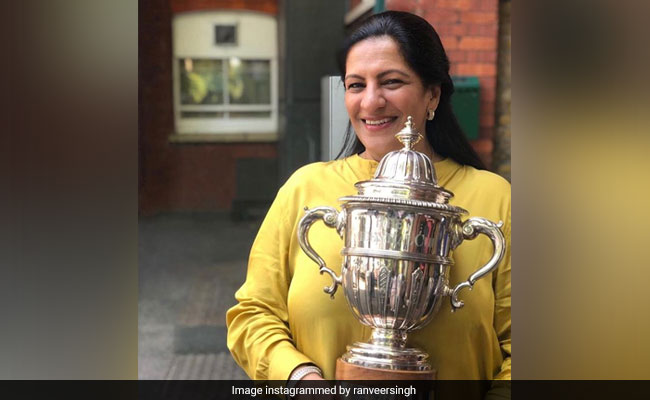 The feeling of holding the real 1983 World Cup trophy is surreal and Ranveer Singh's mother Anju Bhavnani knows it. The actor, on Friday, shared a photo of his mom posing with the World Cup trophy won by team India by defeating West Indies at Lord's in 1983. Ranveer Singh plays the role of former cricketer and legend Kapil Dev, under whose captaincy team India won the trophy in 1983, in Kabir Khan's 83, which released in cinemas today. Sharing the picture of his mother, an excited Ranveer Singh wrote: "Hum jeet gaye, Mumma! (PS: That's the actual cup!)." His emotions can easily be decoded by the emojis he used in his caption - an amulet icon, a red heart icon and a star eye emoji.

Reacting to Ranveer Singh's post, Shweta Bachchan Nanda commented: "Adorable" while actress Neha Dhupia and casting director Shanoo Sharma dropped red heart icons. Actress Richa Chadha, who attended the screening of the film on Wednesday, commented: "Jeet gaye! Thanks for this historic film. Thanks also for waiting for the cinemas for this one. It's a sixer!"

On Friday, Ranveer Singh shared a message sent to him by his coach Rajiv Mehra - in the note, Rajiv Mehra wrote about the "love and sweat" Ranveer Singh poured in while prepping for the film. Rajiv Mehra's message read: "I am just too overwhelmed and grateful to God and everyone who has been a part of this epic. What is has become and what results we are seeing is just an outcome of sheer honesty of the work put in by all. It was like a prayer for you, I remember how much love, sweat you have poured in. Every batting session, every ball that I bowled to you, every single ball you bowled in practice, every single exercise you did, every single pool session and each and every minute we have spent in pursuit of excellence. Is it all worth it, Ranveer. I can't love and thank you enough, I'm just inspired by every inch of who you are."