Suniel Shetty picked just the best song for the video 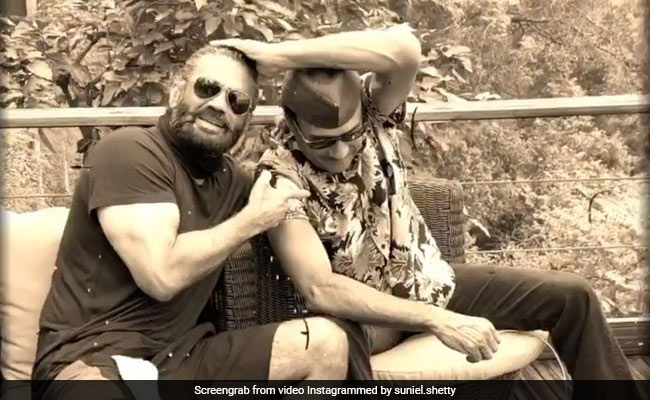 If you want to see the true meaning of friendship goals, just take a look at Suniel Shetty's latest Instagram entry. On Monday night, the 59-year-old actor posted a video with his best friend and actor Jackie Shroff (63). The video shared by Suniel Shetty, features a few pictures of both the actors together. Suniel Shetty picked just the best song for the video. The theme of the popular sitcom F.R.I.E.N.D.S, I'll Be There For You by The Rembrandts plays in the backdrop. Suniel Shetty, captioned the video: "45 years and counting! Pastry palace to Khandala." He added a heart emoticon to the post.

In the comments section, Jackie Shroff's son Tiger Shroff dropped a couple of heart emoticons, while Athiya Shetty, daughter of Suniel Shetty, wrote: "Cutest." Jackie Shroff and Suniel Shetty co-starred in films such as Border, Baaz: A Bird In Danger and Refugee." We would love to see Jackie Shroff's reaction to the post.

In terms of work, Suniel Shetty was last seen in Darbar, which released earlier this year. The film starred Rajinikanth in the lead role. The actor will next be seen in Marakkar: Arabikadalinte Simham, Mosagallu, Mosagallu and Mumbai Saga.

Jackie Shroff was last seen in Sanjay Dutt's Prassthanam. He also starred in Saaho, in which he shared screen space with Prabhas and Shraddha Kapoor, and in Salman Khan's Bharat last year. The actor's upcoming project is Radhe: Your Most Wanted Bhai which stars with his Bharat co-stars Salman Khan, Disha Patani. The film also features Randeep Hooda.