Amitabh Bachchan doesn't know who owns the rights for the movie Abhimaan, in which he featured as a professional singer 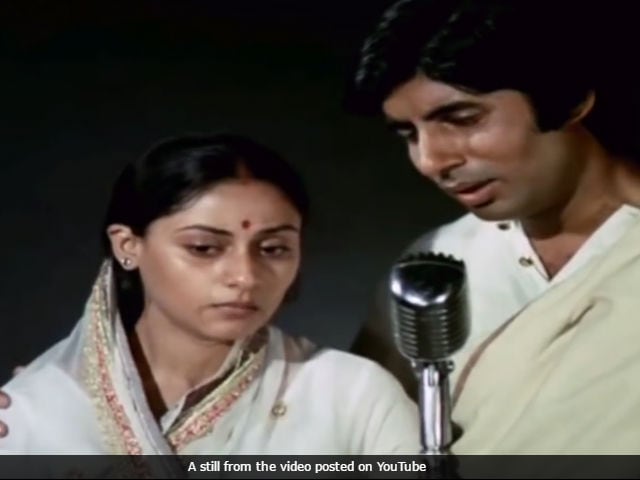 New Delhi: Amitabh Bachchan, who featured in Abhimaanalong with his actress wife Jaya Bachchan (they got married just before the film released), says ownership for the rights of the 1973 film is still unknown. Mr Bachchan wrote on his blog, "And we have 44 years of the film that brought Jaya and me together for a most memorable creative in our respective careers. The excellence of Hrishi Da, the music of S.D. Burman, the master and the support of some of the most brilliant talent in its writing. (sic)" The Hrishikesh Mukherjee-directed film was a Hindi musical drama co-starring Amitabh Bachchan, Jaya Bachchan, Bindu and Asrani. On his blog, Amitabh Bachchan also wrote, "Amiya - the production name was our production. Ami from Amitabh and Ya from Jaya and our respective secretaries were looking after the nitty gritties while we worked. But as is with most such productions, things went out of hand and we ended up with nothing. The rights all still belong to 'don't know who,' perhaps one of the secretaries."

Amitabh Bachchan also wrote, "There are many inputs for the film but some other day shall go into the finer points of the thinking that went behind in Hrishi 'a's mind. (sic)"

Promoted
Listen to the latest songs, only on JioSaavn.com
Filmmaker Karan Johar also added a tweet and said that Abhimaan is one of his favourite films.

One of my favourite films Amit uncle...I cry every time I see it....the most memorable music and performances.... https://t.co/7OiBZh0qjb

Meanwhile, Amitabh Bachchan has Thugs Of Hindostan with Aamir Khan and 102 Not Out with Rishi Kapoor in the pipeline. He will also appear in a special role in the R Balki-directed Padman.