30 Years Of Dil: Madhuri Dixit Recalls Working With Aamir Khan In The Film

"Working with Aamir Khan was so much fun! I remember how Indra Kumar gave us an earful every day for joking around on the sets," wrote Madhuri 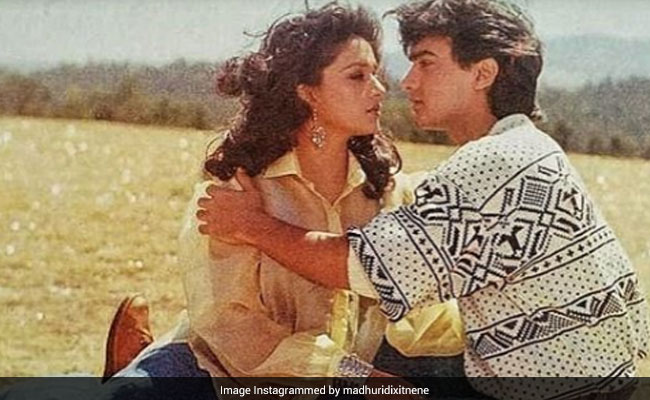 Aamir Khan and Madhuri Dixit's evergreen film Dil completed 30 years on Monday. On the occasion, the actress made a trip down memory lane and shared her "fond memories" of the film. Madhuri shared a few stills from the film along with a BTS picture and recalled her experience of working with Aamir in the movie. Dil, directed by Indra Kumar, also featured Anupam Kher, Saeed Jaffrey, Deven Verma and Rajesh Puri in pivotal roles. The film released on June 22 in 1990. Sharing the pictures, Madhuri wrote how Indra Kumar would scold her and Aamir Khan for "joking around" on the sets: "#30YearsOfDil...Working with Aamir Khan was so much fun! I remember how Indra Kumar gave us an earful every day for joking around and playing tricks on the sets."

Dil fetched Madhuri Dixit her first Filmfare Award. In the same post, she even shared a picture of herself showing off her trophy with Sunny Deol standing next to her. Madhuri won the Best Actress trophy while Mr Deol took home the Best Actor award (for his film Ghayal) at the 36th Filmfare Awards in 1991.

The actress added in her post: "Thanks to the team's hard work and your love, the film did well and I also won my first Filmfare award. Fond memories."

After the 1990 film, which also marked the directorial debut of Indra Kumar, the director collaborated with Madhuri Dixit again in 1992 for Beta and in 1995 for Raja.

Aamir Khan and Madhuri Dixit, who played each other's love interest in Dil, also worked together in Deewana Mujh Sa Nahin, which also released in 1990.