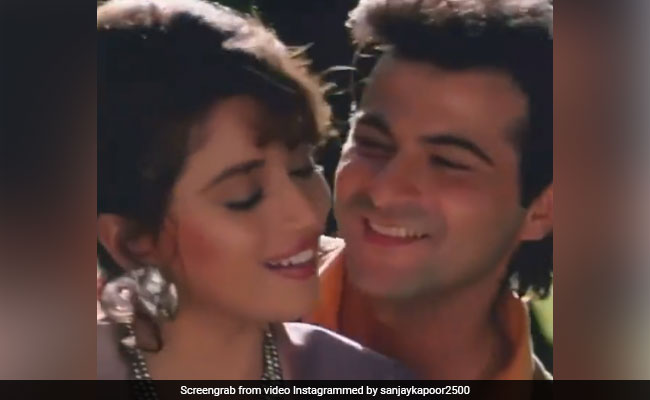 Sanjay Kapoor and Madhuri Dixit's 1995 film Raja completed 26 years of its release today. To make the day a memorable one, the actor posted a video of the song Kisi Din Banoongi Main Raja from the film on Instagram. In his caption, Sanjay Kapoor wrote that Madhuri made him feel so comfortable on set that he never felt like he was working with a superstar. Madhuri debuted in the world of films almost a decade before Sanjay did with the 1984 drama Abodh. Talking about Sanjay's post, he also spoke about the first shot he gave for the film while shooting in Ooty. "26 years of Raja... Time flies...We started shooting for Raja with this song in Ooty, Zara Phir Se Kehna was the first shot I gave, I cannot thank Madhuri enough for making me so comfortable on set never felt I was working with a super superstar, What a super team we had," read his post.

Within an hour, the comments section was flooded with lots of love from his fans and friends. Sanjay Kapoor's wife Maheep Kapoor was among the first ones to react. She left clapping hands and heart emojis. Her friend, designer Seema Khan also showered some love in the comments. Actor Nakuul Mehta wrote, “Classic,” while actor Samir Soni called him, “Mr handsome.”

The film was directed and co-produced by Indra Kumar. Sanjay Kapoor played Raja while Madhuri portrayed Madhu in the film. The movie showed that Madhu's brothers (played by Mukesh Khanna and Dalip Tahil) did not approve of Raja and Madhu's alliance. How they try to drive them apart but eventually fail is precisely the basic plot of the film. The movie also featured Paresh Rawal in a key role. The actor played Brijnath Patangwala, the elder brother of Raja.

Sanjay Kapoor made his Bollywood debut with the 1995 film Prem opposite newcomer Tabu. He recently featured in a short film titled Sleeping Partner opposite actress Divya Dutta. His supernatural crime thriller web series titled The Last Hour premiered on May 14 on an OTT platform. Sanjay Kapoor will soon reunite with Madhuri onscreen in the upcoming film Finding Anamika.