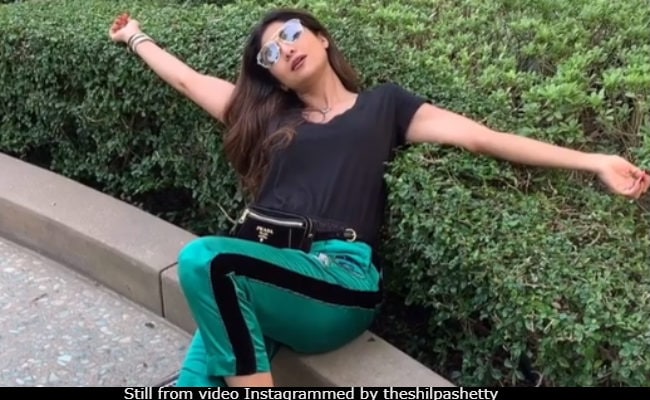 Shilpa Shetty, who made her Bollywood debut with 1993's Baazigar, couldn't have missed celebrating this special day. On Monday, the film clocked 25 years and so did Shilpa's career in Bollywood. Hence, she had to had to send a message to her fans and her entire team of Baazigar, including Shah Rukh Khan, Kajol and director duo Abbas-Mustan. Shilpa, who is currently in Hong Kong with her family, made a hilarious reference to the scene in which Shah Rukh pushes her off a building in the movie, and said: "Seems like I have fallen off a building but no! As good as that, Disneyland is quite hectic but it's a great way to remember being thrown off the building 25 years ago. And today we are celebrating that."

In Baazigar, Shilpa played Kajol's onscreen sister, who was murdered by Shah Rukh's character to take revenge for his family's misery. In her video, Shilpa added: "It's the 12th of November and this is the day I was introduced in the film industry. I complete 25 years. I love you Shah Rukh, Kajol, Abbas bhai, Mustan bhai and last but not the least Venus (Music label), Ratan ji (producer) for introducing me. And yeah, gosh, I survived the drop and I'm looking 25."

Shilpa, who also thanked her fans and followers for "constant support", added this message in the caption: "12th November, on this day I made my debut with Baazigar. Dunno how time has flown as we celebrate 25 years of Baazigar and 25 years of my career. Heartfelt gratitude from the bottom of my heart to team Baazigar, Shah Rukh Khan, Kajol, Abbas-Mustan, Ratan ji for the support and last but not the least my audience for always showing me sooooo much love and being so forgiving!"

12 th November on this day I made my debut with Baazigar. Dunno how time has flown as we celebrate #25yrsofbaazigar and #25yrs of my career Heartfelt gratitude from the bottom of my heart to team #baazigar, @iamsrk @kajol #abbasmustan #Ratanji for the support and last but not the least my audience for always showing me sooooo much love and being so forgiving #25years #celebration #gratitude #happiness #timeflies #nostalgia #movies

Meanwhile, speaking to news agency PTI on Sunday, Mustan Burmawalla revealed that Baazigar was initially filmed with two endings and added that both Salman Khan and Anil Kapoor had turned down the role of the anti-hero, finally played by Shah Rukh: "People still like the film and it is a big compliment to the entire team. The important thing is the maker should be convinced with his own vision as that will reflect on screen. We had a hero playing a negative role. Though it led to the hit pairing of Shah Rukh and Kajol, it was not a romantic film. But it all worked well," PTI quoted him as saying.