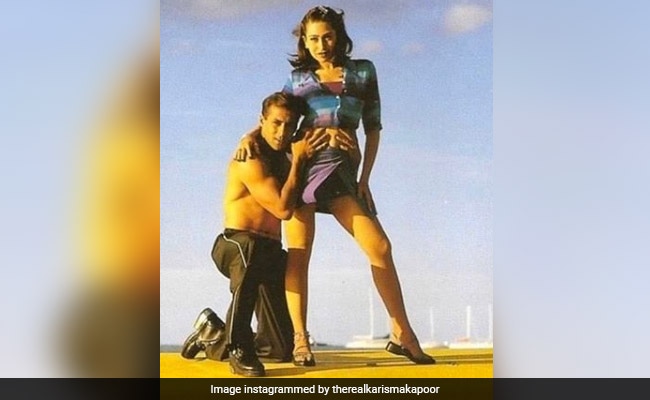 Karisma Kapoor and Salman Khan's film Dulhan Hum Le Jayenge completed 20 years on Tuesday and on the occasion, the actress shared a set of pictures from her "super fun shoot" and it will totally cheer you up. The pictures from the shoot, that took place in Mauritius, featured Karisma and Salman posing in epic ways for the camera. In one of the pictures, Karisma and Salman can be seen looking and smiling at each other while in another, the actor can be seen holding Karisma by her waist and looking at the camera. Sharing the pictures, Karisma wrote: "20 years of #dulhanhumlejayenge. Time flies! I remember this super fun shoot in Mauritius so fondly! #tuesdaythoughts."

Karisma and Salman's fashionable outfits in the throwback pictures made Rhea Kapoor comment on the post: "Can we talk about the fashion in this movie? It's not to be taken lightly." David Dhawan's actor son Varun Dhawan also commented: "I was there."

On the work front, Karisma Kapoor made her acting debut with the 1991 film Prem Qaidi. She went on to feature in films such as Raja Babu, Coolie No 1, Raja Hindustani, Biwi No 1, Fiza, Zubeidaa and many more. She was last seen in web-series Mentalhood, which also stars Dino Morea, Sandhya Mridul, Shilpa Shukla, Shruti Seth and Tillotama Shome in key roles.

Afro-Jazz Saxophone Legend Manu Dibango Dies Of Coronavirus, He Was 86