102 Not Out Song Badumbaaa: Amitabh Bachchan Makes 'Boring' Rishi Kapoor Dance And How

Badumbaaa, a new song from Big B and Rishi Kapoor's upcoming film 102 Not Out released on Thursday 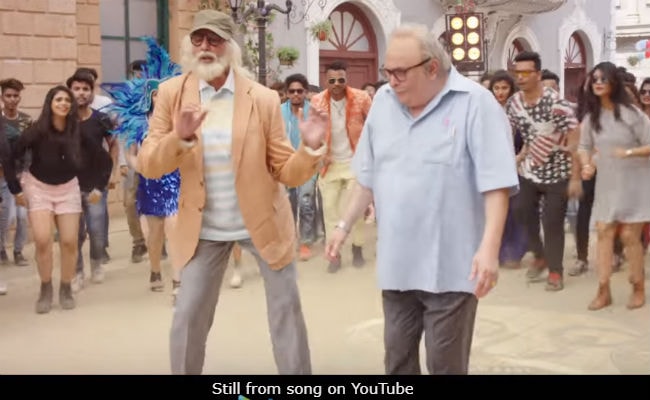 New Delhi: Amitabh Bachchan, take a bow! What dance moves, ya. Badumbaaa, a new song from Amitabh Bachchan and Rishi Kapoor's upcoming film 102 Not Out released today and is sending fans of the actors into some sort of a meltdown. The song Badumbaaa has all the ingredients of a perfect entertainer - starting from a colourful set and catchy beats to quirky dance moves and hilarious lyrics. In Badumbaaa, Rishi Kapoor, who plays the 75-year-old son of Amitabh Bachchan's onscreen character, is taken for a ride for being the "thakela pakela insaan" he is. Big B prescribes the various ways Rishi Kapoor can rejuvenate his boring lifestyle and can bring some enthusiasm and colour into it.

Inspired by his evergreen father, Rishi Kapoor does try to match steps with his 102-year-old dance companion and also offer certain advise on how to keep calm and be serious in life. But who care? Big B believes is all for YOLO, after all.

With lyrics by Amitabh Bhattacharya, the song has been sung by both Amitabh Bachchan and Rishi Kapoor. Watch Badumbaaa from 102 Not Out here:


Promoted
Listen to the latest songs, only on JioSaavn.com
In an interview with IANS recently, Rishi Kapoor shared his experience of working with Big B after a gap of almost three decades and said: ""We worked in this film after 27 years but from the time we went on the set, we started rehearsing. We did not feel the gap between these years. I feel proud to say that I have been working with him for the last 44 years. Our first film was Kabhi Kabhie (1976) and the last time we worked together was in Ajooba (1991)."

Directed by Umesh Shukla, 102 Not Out releases on May 4.