102 Not Out First Poster: Amitabh Bachchan and Rishi Kapoor co-star in a film which "celebrates life" 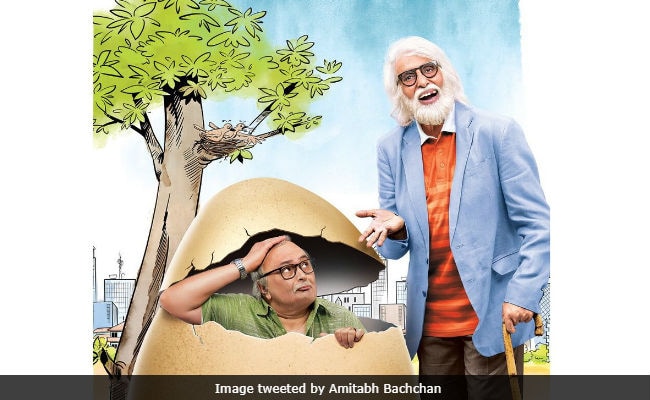 Amitabh Bachchan and Rishi Kapoor in 102 Not Out. (Image courtesy: Big B)

New Delhi: After a quirky teaser, the makers of 102 Not Out, starring Amitabh Bachchan and Rishi Kapoor, released the first poster of the film. Mr Bachchan and Mr Kapoor, who are co-starring in a film after 27 years, shared the poster on their respective social media accounts. "Presenting first look of 102 Not Out. Celebrate life with this unusual father-son duo on May 4," Big B captioned it while Rishi Kapoor added: "Baap cool, beta old school" to his post. 102 Not Out is directed by Umesh Shukla. Take a look at the poster of 102 Not Out, which put the film on the top of the trends list on Friday:

Baap COOL, beta OLD SCHOOL! Here's presenting the first look of #102NotOut! Celebrate life with this unusual father-son duo on 4th May! @SrBachchan and I back after 27 years !!!!! @umeshkshukla@sonypicsindia#TreeTopEntertainmentpic.twitter.com/Lf988C1jgP

In February, a teaser of 102 Not Out released on social media. The film is based on a Gujarati play of the same name, written by Saumya Joshi. 102 Not Out is the story of a lively 102-year-old man (Amitabh Bachchan) living with his uptight 75-year-old son, played by Rishi Kapoor. Big B's character wants to live life to the fullest while Rishi Kapoor's character prefers to 'act his age.' In the teaser, Big B tells Rishi Kapoor: "Apne bete ko vridh ashram bhejne waala main pehla baap banuga."


Promoted
Listen to the latest songs, only on JioSaavn.com
For the film, Amitabh Bachchan will also sing a song, titled BAADDUUMMBAAA, a made-up word which Big B often uses to express joy on social media IRL. Here's Mr Bachchan's look for the song:

102 Not Out is the story of a man trying to break the record for the oldest person in the world. The film also stars Paresh Rawal.