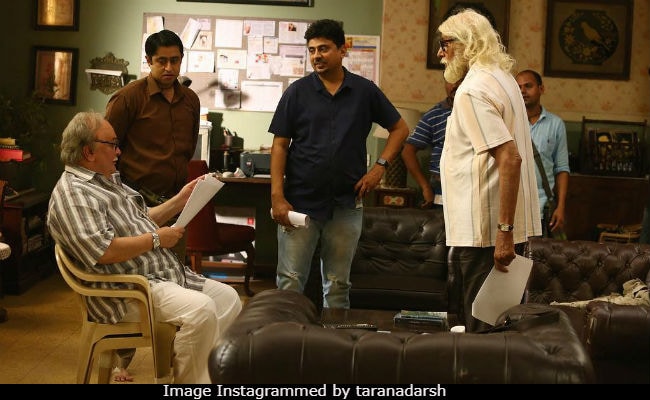 New Delhi: Amitabh Bachchan and Rishi Kapoor's new film is at Rs 22 crores and 'not out!' Trade analyst Taran Adarsh shared the details of 102 Not Out's box office collection and wrote that the movie shows a consistent graph at the box office on weekdays. 102 Not Out's collection figures of Tuesday show that the film made almost similar amounts on both the week days - Monday was Rs 3.02 crores and Tuesday's numbers were Rs 2.83 crores. During its five day stay in theatres, 102 Not Out have raked in Rs 22.50 crores and counting. Directed by Umesh Shukla, 102 Not Out reunites Rishi Kapoor and Amitabh Bachchan on the big screen after 27 years.

Promoted
Listen to the latest songs, only on JioSaavn.com
Once the movie entered the week, Mr Adarsh reviewed the film's performance as "super strong". "Decline on Mon [vis-a-vis Fri] is a mere 9.09%, which is EXCELLENT trending," he added.

102 Not Out stars Amitabh Bachchan as a 102-year-old father while Rishi Kapoor has been cast as a 75-year-old son. In his review for NDTV, Saibal Chatterjee writes about the legendary co-stars: "They are a riot. Without them, 102 Not Out would have just been a whole lot of wearisome whining. Especially delightful is Kapoor, who makes the transition from a man burdened with too many worries to an assertive gentleman who begins to look ahead to the future with hope with the minimum of fuss. Bachchan, of course, never takes his eyes off the ball, reeling out one dexterous tic after another."