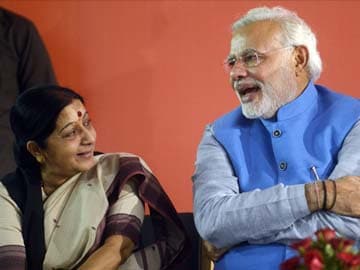 Prime Minister Narendra Modi (R) talks with new Foreign Minister Sushma Swaraj during a meeting at the party headquarters in New Delhi on May 17, 2014.

She has many firsts to her credit; she was the youngest cabinet minister in the Haryana government at 25, she was also the first woman Chief Minister of Delhi.

Ms Swaraj has also been given the charge of Overseas Indian Affairs.

She takes charge at a time India's growing international influence has given it a prominent voice in global affairs even as issues in the region keep the largest democracy busy.

Ties with Pakistan and China are some of the perennial challenges for Indian foreign policy practitioners.

She began her political career with the Akhil Bharatiya Vidyarthi Parishad or ABVP, the student wing of the BJP's ideological mentor Rashtriya Swayamsevak Sangh.

Promoted
Listen to the latest songs, only on JioSaavn.com
She was Cabinet Minister for Information and Broadcasting in the 13-day Atal Bihari Vajpayee Government in 1996.

She resigned from the Cabinet in the next Vajpayee regime to take over as Delhi Chief Minister in October 1998.
Comments
Sushma Swarajwoman Foreign MinisterNarendra ModiNawaz Sharif