Proud to be a 'Chaiwala', Just like Modi: Pune Tea Vendor 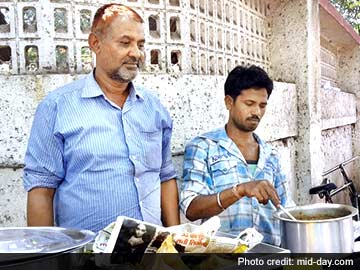 Pune: As election results were declared, mid-day spoke to two vendors outside the counting station at FCI godown in Koregaon Park

Pune: A 50-year-old chaiwala is no longer embarrassed about his profession. After all, a former tea-seller ridiculed by his opponents for his profession is set to be the Prime Minister of the country.

So, when Narendra Modi was creating history by winning with a clear majority at the Centre, Amar Upadhyay, the tea-seller, was making money by setting up his stall outside FCI godown in Koregaon Park, where the counting was taking place.

"On a usual day, I earn around Rs 1,500 by selling tea from 7 am till late evening at M G Road. However, yesterday I shifted my handcart outside the counting venue, thinking I might get better business there.

And I was right, I earned two times more than I do on a normal day in just five hours," said Upadhyay, a native of Rajasthan, who knows that the new Prime Minister also comes from a humble background.

Upadhyay admits that sometimes his friends and relatives make fun of his work and he would feel embarrassed in the past. But now, he feels proud and happy to serve tea. "Why should I pay heed to what people think about my business? I am proud to do the same work that my Prime Minister used to do at a young age," he added.

Just like Upadhaya, it was a good day of business for 30-year-old Suresh Ghatge, who started his business of selling daal-chawal outside FCI godown on May 16. "I was sure that Modiji would become the Prime Minister.

Promoted
Listen to the latest songs, only on JioSaavn.com
This is the reason why I decided to open my thela today a day that brought victory for him," said Ghatge, who recently shifted to Pune from Ahmednagar, adding, "I hope that my small business does wonders, just like Modiji's performance in this election."