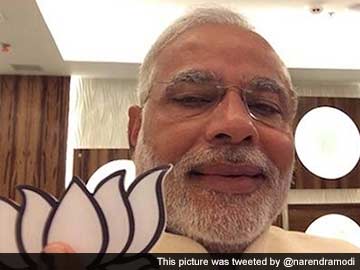 Twitter said Mr Modi's selfie tweet was the "most re-tweeted" item today, while #SelfieWithModi was second on most trending topics across India.

According to Twitter data, there were close to 7 lakh tweets related to elections today as the seventh phase of polling took place in 89 seats in various parts of the country. Among these, nearly 2 lakh were related to Mr Modi while AAP came second with over 66,000 tweets. There were over 16,000 tweets specifically about Mr Modi's selfie. (Elections: Full coverage)

Promoted
Listen to the latest songs, only on JioSaavn.com
Mr Modi's tweet where he has posted a selfie showing his inked finger and his party's symbol lotus were retweeted over 2,800 times.

Selfie refers to a self-portrait photograph that people take through their hand-held devices and post the same on social networks. It has become a rage in recent months especially when Danish Prime Minister Helle-Thorning Schmidt took a 'selfie' along with US President Barack Obama and British Premier David Cameron at the Nelson Mandela memorial.