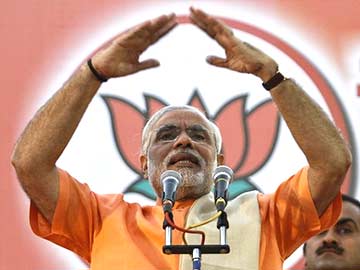 Narendra Modi has led his BJP to a stunning victory with the strongest mandate any Indian government has enjoyed for 30 years.

Gandhinagar: About a year ago Narendra Modi sat down with some of India's best and brightest to mount a "shock and awe" election campaign that one strategist likened to a one-sided US military operation against Saddam Hussein's forces in the Gulf. (India Decides 2014: Track Live Results Here)

From an unmarked office in Gandhinagar, the capital of Gujarat, the young men and women, some on sabbaticals from firms like JP Morgan and Deutsche Bank, worked on turning a fragmented parliamentary election involving 543 seats into a presidential-style referendum on candidate Modi. (Know your winning candidates)

In doing so, Mr Modi, 63, adopted the language of a youthful country eager for change, using everything from holograms to WhatsApp. (Here are state-wise results)

The modern approach worked: just an hour into the counting of votes on Friday, it was clear that Mr Modi has led his BJP to a stunning victory with the strongest mandate any Indian government has enjoyed for 30 years. (Elections 2014: All candidates)

By midday, the BJP and its allies were leading the count in 329 parliamentary seats, far ahead of the 272 majority required to rule. Even on its own, the BJP had crossed the halfway mark. (India Decides 2014: Constituencies)

In recent years, Gujarat, the state Mr Modi has governed since 2001, has been compared with Guangdong province, the spearhead of China's economic revival.

Since Mr Modi took control, Gujarat has led the nation in GDP growth. It accounts for 16 percent of industrial output and 22 percent of exports, despite having 5 percent of its population.

Under his stewardship, farmers and industry have been assured uninterrupted power and bureaucratic controls slashed.

A central government-ordered study last month said it had the best land acquisition policies in place, among all of India's 29 states in terms of ease of doing business.

Land, by far, has been the single biggest hurdle around the country, holding up 90 percent of infrastructure projects.

Gujarat's highways are India's fastest, a far cry from the potholed roads in the northern belt, and its ports are among the busiest.

But repeating that success nationally presents significant challenges in a country with a complex federal structure, a bureaucracy more wedded to socialist controls than reform and a growing gap between rich and poor among its 1.2 billion people.

India must create 10 million jobs a year, four times the pace of the last 5 years, to absorb youth into the workforce.

And unlike China, India is not centralised. Mr Modi will have a fight on his hands to gain full cooperation from many state governments, which he needs to implement his agenda nationwide.

Some have said the pace of development in Gujarat has caused environmental damage and threatened small communities, and that crony capitalism flourished under Mr Modi's unquestioned rule.

Critics also say it lags behind other states in social indicators such as mortality rates.
But the criticisms have failed to stick.

Mr Modi, was the only face of the campaign. He has covered 300,000 km since being named the BJP's prime ministerial candidate in September, addressing 457 meetings. When he could not show up, he appeared as a hologram.

"He has become a purveyor of dreams," said Sanjay Gupta, a former state bureaucrat who quit to go into business and start a chain of hotels. "It's hard to see how he can meet all the pent-up aspirations without re-engineering the system."

The son of a railway station tea-seller, Modi has humble roots which he reminds voters are in contrast to the privileged upbringing of the Nehru-Gandhi dynasty and its scion Rahul Gandhi, who led the campaign for the ruling Congress party.

Promoted
Listen to the latest songs, only on JioSaavn.com
Critics question his handling of 2002's communal riots in Gujarat, in which more than a thousand people were killed, most of them Muslims. A Supreme Court inquiry has said there is no evidence that he fuelled the violence.

"Modi is set to govern all of India, the 150 million Muslims included, and there is reason to be cautious," said Ruchir Sharma, head of emerging markets at Morgan Stanley.
© Thomson Reuters 2014