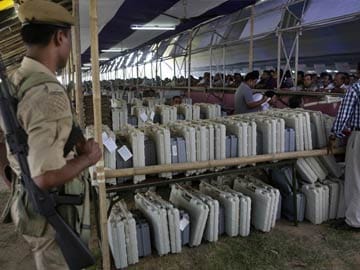 Kolkata: As Jangalmahal, once the hotbed of the Maoists, goes to the poll tomorrow in the fourth phase of Lok Sabha election, the Election Commission (EC) has stepped up security arrangement by deploying adequate central forces in all the polling stations in this West Bengal district.

"Area domination, route march and flag marches have already begun in the entire region, while security net have been thrown around the assembly segments of Jhargram, Binpur, Bandwan, Balarampur, Baghmundi and Jaypur with special deployment of Bomb Detection and Disposal Squad, and eight anti-landmine vehicles," Mr Gupta said.

Three helicopters, two from the Indian Air Force (IAF) and the rest from CRPF, have already been deployed for air-surveillance over three LWE affected districts of West Midnapore, Bankura and Purulia.

Simultaneously, medical support teams have been kept ready for emergency movement in which helicopters could be used as air-ambulances.

The helicopters could also be used for emergency evacuation purpose or for the movement of security personnel, Mr Gupta said.

To improve communication in Jangalmahal's shadow zones, ten digital satellite towers and 20 satellite phones had been installed, he said.

Promoted
Listen to the latest songs, only on JioSaavn.com
Facing strong criticism over alleged laxity in the third phase, the poll panel changed the deployment pattern of central forces for today's election and also changed guidelines for the movement of polling agents, presiding officers, observers and micro-observers.

"At the district level deployment of forces will be finalised following discussion with DM, SP, General Observer, Police Observer and the candidates of the constituencies," EC sources said.