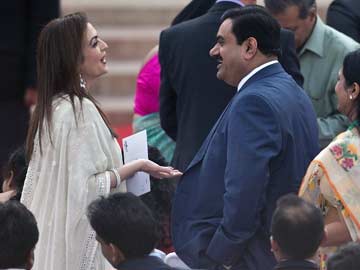 ndian businessman Gautam Adani (R) talks with Neeta Ambani, the wife of Indian business magnate Mukesh Ambani, prior to the swearing-in ceremony for new Indian Prime Minister Narendra Modi and his cabinet ministers at the Presidential Palace in New Delhi.

The who's who of corporate India rubbed shoulders with political big-wigs and diplomats on the forecourt of Rashtrapati Bhavan, which hosted its biggest-ever ceremony with close to 4000 people attending Modi's inauguration.

Reliance Industries Chairman and Managing Director Mukesh Ambani, his wife Nita and two sons, his brother Anil and family, and their mother Kokilaben Ambani were in attendance, as were Adani Group head Gautam Adani and his wife.

Representation from the IT sector at the inauguration was led by Nasscom president R Chandrashekhar.

Among the major names missing from the ceremony were Tata Group Chairman Emeritus Ratan Tata and his successor at the salt-to-software conglomerate Cyrus Mistry, who were invited but couldn't attend as they were travelling abroad.

M&M Chairman Anand Mahindra and UB Group chief Vijay Mallya were both also out of the country and couldn't make it.

HDFC Chairman Deepak Parekh was unable to attend because of a prior engagement in Mumbai. Aditya Birla Group Chairman Kumar Mangalam Birla too had been invited for the event.

Promoted
Listen to the latest songs, only on JioSaavn.com
FICCI President Sidharth Birla, PHD Chamber President Sharad Jaipuria and IFFCO Managing Director U S Awasthi were among the industry leaders who attended the function.