TS EAMCET result is expected next week. The marks of students who appeared in TSEAMCET will be normalized.

TS EAMCET results are expected some time next week

TS EAMCET result is expected next week. Though an official confirmation is awaited, it is expected that the TS EAMCET results would be released by the end of next week. The Telangana State Engineering, Agriculture, and Medical Common Entrance Test or TS EAMCET is conducted by Jawaharlal Nehru Technological University (JNTU), Hyderabad on behalf of Telangana State Council of Higher Education (TSCHE). TS EAMCET is conducted for admission to B.Tech. and Pharm.D. courses offered at institutes in the Telangana state.

The marks of the candidates who have appeared in the TS EAMCET exam will be normalized.

The official notification for TS EAMCET says, "The main aim of the Normalization is to ensure that no student gets advantage/disadvantage due to multiple sessions. The normalization process brings all the candidates across all sessions on a comparative scale. Due to this process, the marks of the easy session may be reduced marginally and marks of hard session may increase marginally on the global scale."

TS EAMCET scores will be normalized according to the formula given below: 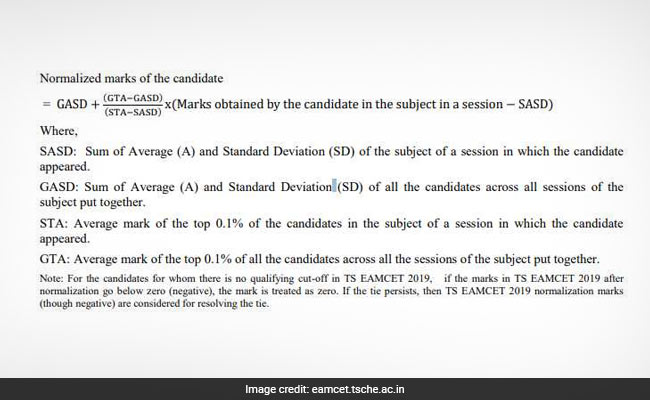 An exhaustive E-learning program for the complete preparation of TS EAMCET exam.