Amidst wild speculations about 10th board result, Central Board of Secondary Education (CBSE) has finally declared the result for class 10th board exam today. The exam was conducted in March-April this year.

CBSE 10th Result 2017 Declared; Check Now At Cbseresults.nic.in
New Delhi: Amidst wild speculations about CBSE 10th board result, Central Board of Secondary Education has finally declared the result for class 10th board exam today. The CBSE Board Class 10th exam was conducted in March-April this year. After the board had declared the result for CBSE 12th board exam, there was much anticipation about the 10th results as the board is known to declare 10th results soon after 12th results. The result for all the students who appeared in the 10th board exam is available on Central Board of Secondary Education (CBSE)'s official results portal.

So far the result has been declared for Allahabad, Chennai, Delhi, Trivandrum, and Dehradun region. Result for Ajmer, Patna, Panchkula, Guwahati and Bhubaneshwar regions are awaited.


According to PTI, Trivandrum region has highest pass percentage at 99.85, followed by Madras at 99.62 and Allahabad at 98.23 per cent. Delhi's pass percentage has fallen by over 13 per cent. The pas percentage for Delhi is 78.09 this year as opposed to 91.06 per cent last year. 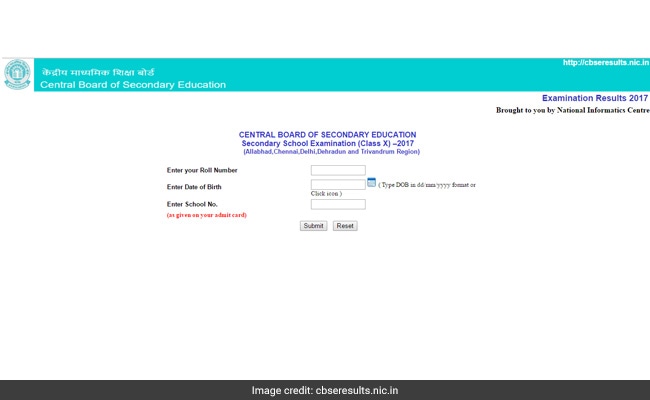 Take a printout of your result. However, the online result is only provisional in nature and must be confirmed with the original marks statement which will be available shortly after result declaration at the respective schools. Students can use the online marks statement to apply at schools for admission to 10+2 or inter college but will need their original marks sheet at the time of admission.

CBSE releases the 10th board result in the form of grades. The grading system was introduced in 10th board exam in order to reduce stress among students who felt undue pressure which resulted from competitive aspects of scoring higher marks and percentage.