The bitter rivals discussed power and water problems in Delhi at Arvind Kejriwal's home. Sheila Dikshit, 81, was accompanied by other state Congress leaders. 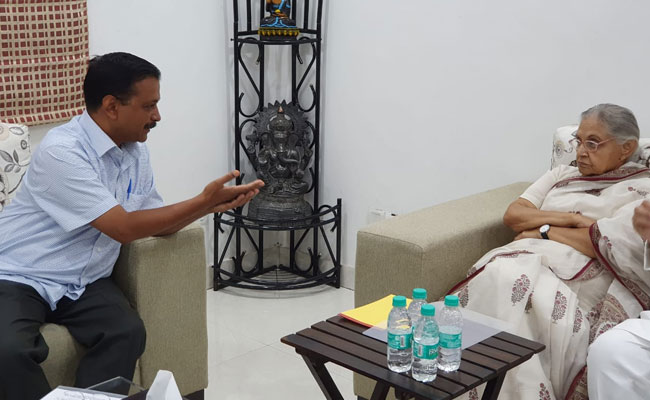 Former Delhi chief minister Sheila Dikshit met Arvind Kejriwal, her successor and the current Chief Minister, on Wednesday, weeks after both their parties were defeated in the national election. The meeting comes eight months before Delhi votes in the state election next year.

The bitter rivals discussed power and water problems in Delhi at Mr Kejriwal's home. Sheila Dikshit, 81, was accompanied by other state Congress leaders.

"In 2013, when Arvind Kejriwal went to meet Sheila Dikshit to discuss the issue of electricity, she didn't meet him. But today, Chief Minister Kejriwal listed to Sheila ji," AAP leader Saurabh Bharadwaj said. He said the complaints of the Congress leaders were replied to with facts during the meeting following which they did not have anything to say.

Days after Arvind Kejriwal's proposal to roll out free public transport facilities for all women in Delhi, Ms Dikshit, who heads the Delhi Congress, asked its local leaders to submit names of three probable candidates for the state election, which must include a woman. This means 33 per cent of the probable candidates will be women.

The Congress and the AAP had engaged in intense bargaining for an alliance for a few months in the run-up to the general election before finally calling it quits.

The BJP won all the seven seats in Delhi in the national election. The Congress and the AAP drew a blank, with Mr Kejriwal's party placed number three in four of the seven seats.

Sheila Dikshit was defeated in the North East Delhi constituency by the BJP's Manoj Tiwari.