The Ramlila Maidan is getting decked up and workers are busy making arrangements. 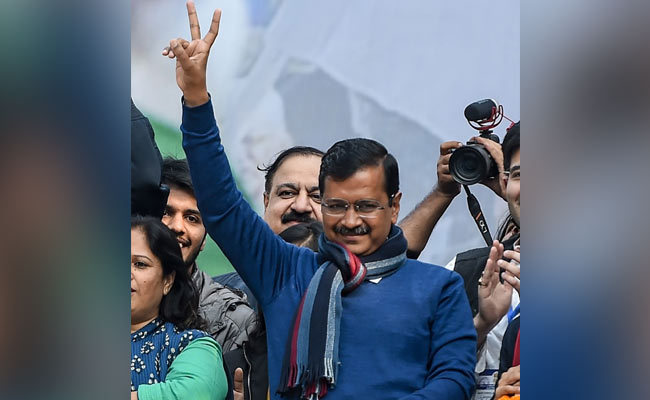 Preparations are afoot at the historic Ramlila Maidan in Delhi for the swearing-in ceremony of Arvind Kejriwal as Delhi chief minister for the third successive term on Sunday.

The ground, which served as the battleground for the 51-year-old bureaucrat-turned-politician during the Anna Hazare-led India Against Corruption movement, is getting decked up and workers are busy making arrangements.

In a near-repeat performance of 2015, the Kejriwal-led Aam Aadmi Party retained power with a scintillating win in the just-concluded Delhi Assembly polls, dealing a body blow to the main rival BJP and completely decimating the Congress in a keenly-watched battle that took place in the midst of anti-CAA protests.

The Delhi government, North Delhi Municipal Corporation, which owns the Maidan, and Public Works Department are working in tandem to make the venue ready for the occasion.

"We had levelled the ground during the PM's event that took place recently. So, other ground work needs to be done. We have handed over the charge to the Delhi government and its PWD is making other necessary arrangements," a senior NDMC official said.

Toilet blocks already are in place in and around the Maidan. Arrangements for other sanitation facilities like mobile toilets, are being done, he said.

Senior AAP leader Gopal Rai will visit the Ramlila Maindan on Saturday to assess the preparations for the event, officials said.

The sprawling ground, where socialist leader Jayaprakash Narayan had addressed a massive gathering during the ''Total Revolution'' movement in 1970s, has a capacity of about 1.25 lakh people.

Sources said, besides seating arrangements, there will be arrangement made for people to stand.

AAP convenor Arvind Kejriwal on Thursday had extended invitation to "Delhiites" to attend his oath-taking ceremony to "bless their son".

"Delhiites, your son is going to take oath of Delhi chief minister for the third time. You must come to bless your son. Sunday, February 16, 10 am, Ramlila Maidan," Mr Kejriwal had tweeted in Hindi.

In 2015 too, Mr Kejriwal's oath-taking ceremony had taken place at Ramlila Maidan. It was held on February 14, coinciding with the Valentine's Day.

In 2013 after his party's first poll victory, the swearing-in ceremony was again held at the same venue.

Over a lakh people had attended the 2013 swearing-in ceremony on December 29.

"The PWD will also start decorating the dais and the venue with potted flowers, the NDMC official added.

The AAP in 2015 had stunned its opponents with a massive win in the assembly polls, clinching 67 seats in the 70-member Delhi Assembly.

Mr Kejriwal repeated his triumph in the high-profile New Delhi constituency by handing a crushing defeat to Bharatiya Janata Party's Sunil Kumar Yadav by a huge margin of 21,697 votes.

The historic venue is once again set to reverberate with the sounds of people hailing Mr Kejriwal and his resurgent party.