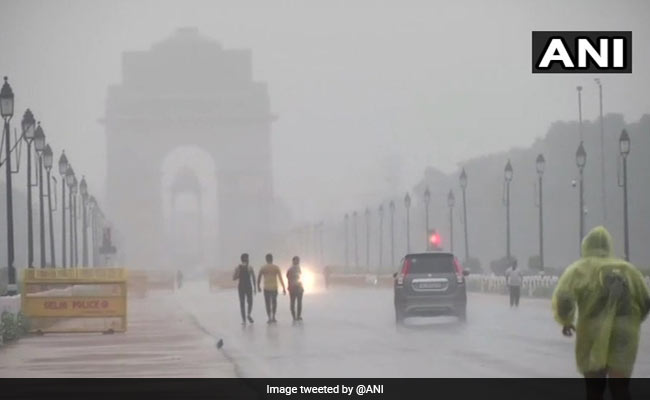 The weather department has predicted a generally cloudy sky with moderate rain today.

Delhi residents woke up to a rainy start to their day even as overcast skies and light showers kept the mercury in check through the night. More rainfall is likely over the course of the day, the weather department has predicted.

The humidity level was recorded at 100 per cent.

The dry spell of heat and humidity finally ended on Monday and Tuesday after heavy rain hit parts of the city and the National Capital Region bringing down temperatures considerably. Light rain and cloudy skies are predicted for Thursday as well, which will be followed by a dry spell and might continue till July 23, senior scientist at the IMD Kuldeep Srivastava had said.

Traffic jams and water-logging were also witnessed in some areas of the city like the outer ring road, Nagloi, Najafgarh road, Delhi Cantt and the Badarpur area among other places due to early morning showers.

Mahesh Palawat, vice-president Meteorology and Climate Change at the Skymet Weather, said on Twitter: "People of Delhi and NCR will face difficulty in commuting for work. It's going to rain over many parts soon."

Vistara Airlines also posted a travel update on Twitter in the morning today warning people on their way to the airport of traffic congestion due to rain.

#TravelUpdate : Due to heavy rains at Delhi, traffic congestion on Delhi airport road is expected. Customers travelling from Delhi are advised to allow more time for their journey to the airport. Thank you.

The national capital has recorded 56 mm rains from July 1 to July 16, which is 43 per cent less than the 30-year average of 97.6 mm, officials said. Overall, it has received 67.2 mm of precipitation against the long-term average of 163.1 mm since June 1, when the monsoon season starts.

"The city has received 59 per cent less rainfall in the monsoon season so far," a weather department official said.