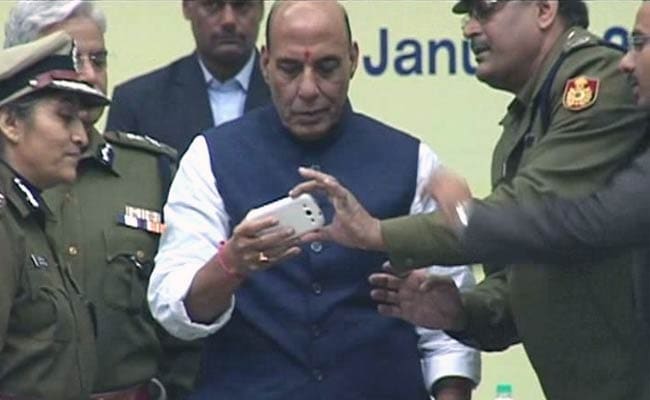 New Delhi: 'Himmat', a mobile application of Delhi Police that will allow women to send a distress call to Police Control Room and their relatives in case of any emergency, was launched in New Delhi on Thursday by Union Home Minister Rajnath Singh.

The app will basically cater to employed women who have smartphones and travel alone even late in the night.


He lauded Delhi Police's efforts to use technology for better policing.

Explaining the work of the app, Delhi Police Commissioner BS Bassi said that after downloading the app, a new user has to register with the Delhi Police website by sharing their name, mobile number and that of a minimum of two relatives/friends.

Once the User registers, the user will get a SMS on mobile number given at the time of registration with a download link and registration key. User has to enter this key in the registration window in the application. This is a one-time process.

"In case of an emergency, the user can send an alert by shaking her phone or by pressing the power button/soft button.

As soon as the distress button is pressed, it will trigger a 30-second audio and video recording on the phone which will be relayed to the Police Control Room, and the victim will get a call back from the PCR," said Mr Bassi.

An SMS alert will also be sent to minimum of five friends and relatives of the user and a status will be posted on his Facebook and Twitter timeline which will be connected to the App.

"All the details of the victim, including her location, time will be there in the SMS which will also be transmitted simultaneously by the Police Control Room to the Police Patrol cars in the area and the local Station House Officer (SHO) through the Delhi Police Cyber Highway," said Mr Bassi.

The police however cautioned people not to misuse the App.

"Himmat application and service are to be used only when there is a threat to Life and Limb. Generating false SOS alerts/ alarms, intentionally/ unintentionally, will lead to cancellation of the registration after 3 such (False SOS alerts) incidents.

The user must report in an email/to support number, if in case they want to re-register and activate the facility.

"This app is currently available on Android platform, since a survey has revealed that most working women use Android based phone. In due course this facility will be extended to other operating systems as well," said a senior Delhi Police official.

The Home Minister also asked Delhi Police to make the app available on iOS platform so that iPhone users can also use it.

Mr Singh said traditionally Indians are more sensitive to women's safety issues as women have been worshiped and respected through ancient times in our society.

The Home Minister accepted that the recent spurt in crime against women has caused a "trust deficit" and the image of Delhi Police and also the Home Ministry has taken a beating but he expressed hope that the police are aware of this and efforts are being taken to improve the situation.

"The representation of women in Central Armed Police Forces is also just 1.22 per cent. In the next 2 to 4 years, we want aim to bring it 5 per cent," he said.

On this occasion, Mr Singh also unveiled an advertisement educating street vendors to report any kind of harassment by police officials on 1064 and 9910641064 on which a complaint in the form of an audio video clip can also be sent.

The Himmat app can be downloaded free of cost from the Delhi Police website - www.delhipolice.nic.in and also from the Google Play Store.

The application also has a help section which has details about how to use each section of the app. Users are requested to follow the instructions there.

It also has 'Safety Tips section' and First aid tips for women to help them in times of crisis.

Meanwhile, Delhi BJP today welcomed the launch of mobile aap, developed by Delhi Police as part of ensuring security of women in the national capital.

Promoted
Listen to the latest songs, only on JioSaavn.com
"This app will certainly give a new sense of security to the women of Delhi by connecting directly with police in emergency," Delhi BJP chief Satish Upadhyay said.

Giving the credit of 'Himmat' to Narendra Modi's government, Mr Upadhyay said this app was new year gift for the women of the national capital by the Centre.