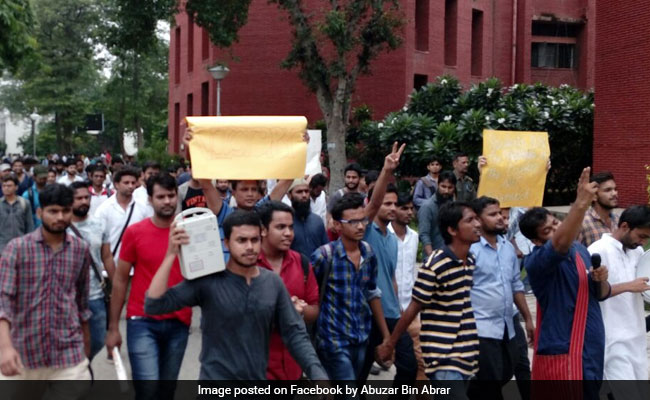 Students have been protesting at the varsity alleging "surprise checks" were made in hostels.

New Delhi: Students at Jamia Millia Islamia who have been protesting since four days against the "surprise checks" by police in the varsity hostels today called off the agitation after the Vice Chancellor assured them of "zero police presence" on campus.

Scores of students have been protesting at the varsity alleging that "surprise checks" were made by Delhi Police in their hostels last Saturday.

While the students dubbed them as "raids", police officials maintained that they were part of routine checks being conducted in that area ahead of Independence Day.

Taking exception to plain-clothed police personnel entering Jamia premises without permission, the varsity authorities had written to the Delhi Police demanding suitable action against them.

"The four-day long protest was called off today after the Vice Chancellor in a written letter to DCP asked for legal action against those cops and officers who had entered university boys hostel premises," the students said in a statement.

"We have been assured of zero police presence on the campus. No police will be allowed to enter the campus without fulfilling proper rules and regulations and no action would be initiated against any students who were involved in the protest directly or indirectly," it added.

The Dean of Students' Welfare, Tasneem Meenai had informed the students that no "raid" was conducted in the Hall of Residence for Boys by police or Intelligence Bureau and the protest should be called off.