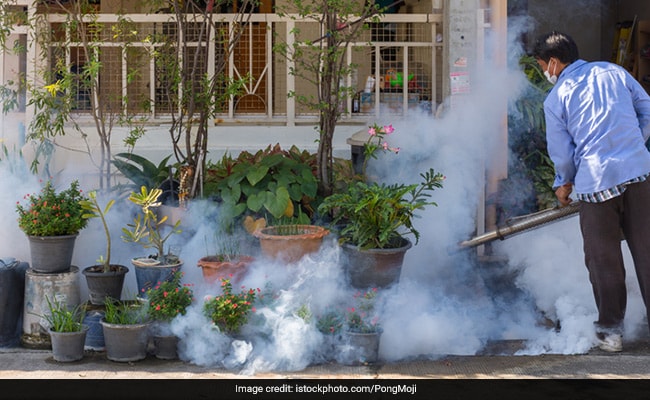 Union Health Minister Harsh Vardhan urged the Delhi government today to declare malaria and dengue as notifiable diseases to help pave the way for a successful eradication of the two vector-borne diseases from the national capital.

Authorities in Delhi have assured that malaria and dengue will be notified this year, Mr Vardhan told reporters after an online review meeting on the city's preparedness to prevent and control vector-borne diseases.

"I urged the Lieutenant Governor and the (Delhi) health minister to notify malaria and dengue as notifiable diseases, which has been pending for years. It will help track each patient and lead to a successful elimination of the diseases," he said.

Mr Vardhan said the target to eliminate malaria from Delhi has been extended from 2020 to 2022.

India's feat of achieving an 83.34-per cent reduction in morbidity and a 92-per cent decrease in mortality caused by malaria has been acknowledged by the World Health Organization, he said.

On the critical step of making malaria notifiable in the national capital, the Union health minister explained that capturing actual data from the hospitals and taking preventive action in the areas of infection are critical to achieve elimination.

Regular reporting from the private sector is also essential for taking timely preventive measures and maintaining the accuracy of the data pertaining to malaria, he was quoted as saying in a statement issued by the health ministry.

"As we move towards elimination, 10 per cent of all fever cases need to be screened for malaria so that no cases of malaria can escape detection," Mr Vardhan said.

He said as no effective drug or vaccine against dengue and chikungunya is available presently, prevention is mainly focussed on controlling the vector, mosquitoes.

He said vector-control measures such as application of larvicides in the breeding habitats can be carried out simultaneously with COVID-19 prevention activities.

"Precautions should be taken if fogging is undertaken as COVID-19 patients in hospitals and quarantined at home or other places may experience breathing problems," he said.

The Union health minister also stressed on community empowerment for their proactive and effective contribution in vector-control activities so that timely and appropriate action can be taken.

The Lieutenant Governor said the process of declaring malaria as a notifiable disease is already underway, according to the statement.

He also informed the meeting about the important efforts of the administration to prevent vector-borne diseases in Delhi.

Union Minister of State for Health Ashwini Kumar Choubey, who was also present in the meeting, said since the elimination of the breeding spots for the vector constitutes the pillar of public health response to malaria, greater focus should be on community engagement through multimedia campaigns.