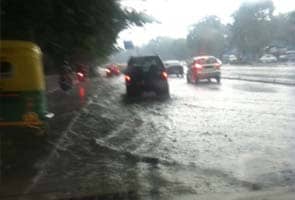 New Delhi: Delhi received much-needed showers today.  The average high this week in the capital had been 42 degrees. (See pics)

The rain arrived at about 5 pm, causing traffic jams in some parts of the capital. Huge traffic jams were reported between Okhla and Nehru Place in south Delhi.

The sky became overcast in the evening and strong winds preceded rains in many parts.
Comments
delhi rains