People from the assembly segments of Shakur Basti and Ballimaran voted in maximum numbers despite scorching heat and fasting during the ongoing Ramzan. 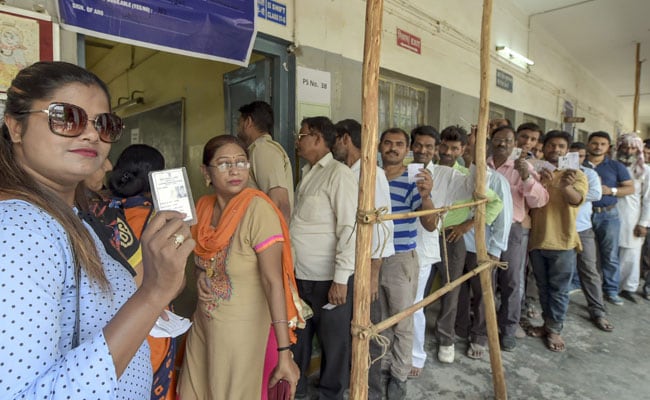 Delhi Cantonment recorded the lowest at 42.13 per cent.

The highest voter turnout of 68 per cent in the national capital was recorded in Shakur Basti and Ballimaran assembly segments, with a sizable minority population, while Delhi Cantonment recorded the lowest at 42.13 per cent.

The New Delhi assembly segment, known for its VVIP voters, saw a voter turnout of 52.58 per cent, the second lowest in the city.

Scorching heat, summer vacation and voting day falling on a weekend were the main reasons cited by experts that kept voters away from polling booths in the national capital.

People from the assembly segments of Shakur Basti and Ballimaran voted in maximum numbers despite scorching heat and fasting during the ongoing Ramzan. The opposition had demanded that the Election Commission should postpone the polls because of the holy month.

The Northeast Delhi constituency, which has Delhi BJP chief Manoj Tiwari, former Chief Minister Sheila Dikshit and AAP's Dilip Pandey in the fray, clocked the highest turnout at 63.45 per cent.

The constituency comprises minority-dominated assembly segments like Seelampur (66.47 per cent), Mustafabad (65.22 per cent), Babarpur (62.14 per cent), which recorded an average voter turnout of over 60 per cent. The lowest turnout was recorded at Ghonda (59.17 per cent) in the constituency.

Ballimaran and Shakur Basti recorded the highest voter turnout of 68.25 and 68.7 per cent, respectively.

Union Minister and incumbent MP Harsh Vardhan, Congress' JP Agarwal and AAP's Pankaj Gupta are locked in a triangular contest for the seat where traders and minorities hold the key. Adarsh Nagar assembly segment clocked the lowest turnout at 57.93 per cent in the constituency.

The New Delhi constituency, which has the likes of BJP's Meenakshi Lekhi, Congress' Ajay Maken and AAP's Brijesh Goyal in the battle, saw the lowest turnout at 56.91 per cent.

Delhi Cantonment, which is primarily home to defence officers and personnel, saw the lowest turnout at 42.13 per cent while the New Delhi assembly segment under the constituency clocked the second lowest at 52.58 per cent.

The Ambedkar Nagar assembly segment clocked the highest voter turnout at 62.81 per cent and the lowest turnout was recorded in Badarpur at 54.77 per cent.

The Northwest Delhi constituency, which had the lowest number of candidates in the fray, clocked 58.72 per cent.

East Delhi and West Delhi constituencies recorded a turnout of 61.93 and 60.64, respectively.

Okhla, a minority dominated area under East delhi, clocked 58.21 per cent, and proved to be an exception among minority areas, which saw a high voter turnout.

Delhi recorded a voter turnout of 60.34 per cent, five per cent less than the 2014 Lok Sabha polls, which recorded 65.22 per cent polling.

Delhi Chief Electoral officer Ranbir Singh said the turnout this year was the second-highest in the last 30 years.

"It is never possible to compare two different polls, but in 2014, the elections were on April 10, which was not peak summer or vacation time. Even schools were open then.

"This time, elections were on a Sunday and with Saturday being a holiday, people might have gone on a vacation to nearby hill stations to escape the heat," he said.

Traditionally Delhi has seen low voter turnouts and the voting percentage would usually be in fifties. The city clocked the highest percentage in 1977, after the Emergency ended.

In 2014 Lok Sabha polls, which saw 65.22 per cent voter turnout, the Chandni Chowk constituency had emerged at the top with 67.87 per cent, followed by Northeast at 67.32 per cent.

The Northwest Delhi constituency had seen the lowest turnout at 61.81 per cent in 2014.

The poll dates had set a war of words between the BJP and the opposition parties.

Leaders of the Trinamool Congress (TMC) and the Aam Aadmi Party (AAP) had earlier said that holding elections during Ramzan will inconvenience Muslims.

BJP spokesperson Shahnawaz Hussain pointed out that Navratas, when many Hindus observe nine-day fast, will also fall during the elections.

Reacting to the controversy, the Election Commission had said that polls are conducted during Ramzan as an entire month cannot be excluded from the schedule. However, dates of main festivals and Fridays are avoided as poll days, it added.