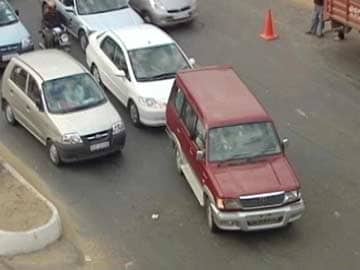 New Delhi: Delhi tops the list among cities in the country in terms of fatal road accidents with five people - four of whom are pedestrians and two-wheeler riders - losing their lives every day, a report by Centre for Science and Environment (CSE) revealed.

The report pointed out that road accidents in the national capital had so far claimed 325 lives during the night and 332 lives in the day time from January 1 to May 31 this year.

As per the report released by CSE, violation of rules is rampant in Delhi  - with 329,000 cases of signal jumps, over 14,000 cases of drunken driving and 45,158 cases of over speeding being reported across different parts of the national Capital. Chennai, which follows Delhi in road accident deaths, reports 25 per cent less fatalities.

"16 deaths and 58 road injures are reported in India in every hour with sharing of fatal accidents in the total being up from 18 per cent in 2003 to 25 in 2012," the report also pointed out.

The report noted that in Delhi, the share of pedestrians falling victims to road crashes is as high as 44 per cent - the highest among key metro cities. As much as 50 per cent of accidents occur at night, and 33 per cent between 6 pm and 12 am, in the city.

"If any other cause was responsible for so many deaths in Indian cities, it would have led to emergency measures. Neither the rich and powerful nor the poor can escape the fury of our killer roads," CSE's executive director Anumita Roychowdhury said.

She also said that report also suggested that most accidents occur near flyovers, crossing and signal-free and high speed corridors.

Promoted
Listen to the latest songs, only on JioSaavn.com
Of the total accident prone hotspots identified near flyovers, about 27 per cent are on the Ring Road, 17 per cent on GTK Road, 13 on Outer Ring Road and 6 per cent on Mathura Road, she said.

"It is important to note that the eight key arterial roads that record nearly 75 per cent of all deaths, have been designed as high speed corridors, which received the maximum attention and resources from the government - including widening for six-eight lanes, flyovers to allow seamless travel for vehicles, subway crossings and foot overbridges to prevent people from crossing on the surface and obstructing traffic flow, and closing of medians to allow vehicles to move uninterrupted. These features have turned these arterial roads into death traps," the report stated.