Will Take "Legal Action" Against Farmers Coming To Delhi To Protest: Cops

The farmers, who are protesting against the Centre's three new farm laws, will reach Delhi on November 26 through five highways connecting the national capital as part of the 'Delhi Chalo' march. 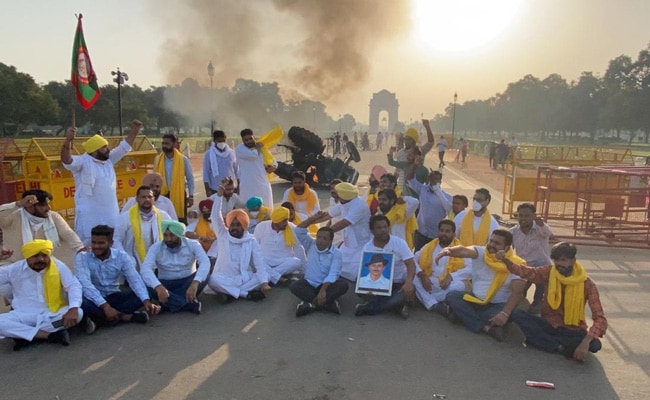 The protest has the support of over 500 farmer organisations. (File)

The Delhi Police on Tuesday said legal action will be taken against the protesting farmers if they come to the city for any gathering amid the COVID-19 pandemic outbreak.

The farmers, who are protesting against the Centre's three new farm laws, will reach Delhi on November 26 through five highways connecting the national capital as part of the 'Delhi Chalo' march.

The police, however, took to Twitter and said that no permission has been granted for any such gathering in the national capital.

"Farmer organisations from UP, Haryana, Uttarkhand, Rajasthan, Kerala & Punjab have called a march to Delhi on Nov 26 & 27. No gathering is permitted amid coronavirus. The permission has been rejected and it was communicated well in time to the organizers," the Delhi Police tweeted from its official handle.

"If protestors still come to Delhi, legal action will be initiated," it said.

The All India Kisan Sangharsh Coordination Committee (AIKSCC), Rashtriya Kisan Mahasangh and various factions of the Bharatiya Kisan Union have joined hands and formed a 'Samyukta Kisan Morcha'' to press the central government to scrap the three farm laws.

The protest has the support of over 500 farmer organisations.

A seven-member committee has also been formed to coordinate the operations of the Morcha.

Farmers have expressed apprehension that the new laws would pave way for the dismantling of the minimum support price system, leaving them at the "mercy" of big corporates.

They have been demanding that the laws be repealed.