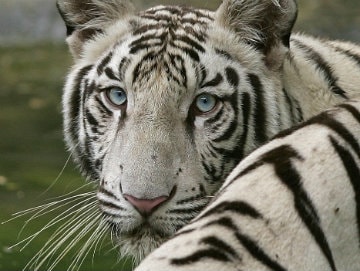 A white tiger stands in a pool at an enclosure at the Delhi zoo. (Agence France-Presse)

New Delhi: The Delhi High Court on Monday issued notice to the city police, the city zoo and the Central Zoo Authority on a plea filed by the widow of a man who was mauled to death by a tiger at the zoo.

The widow has sought Rs.50 lakh compensation for "security lapses" on part of the authorities after her 20-year-old husband was mauled to death by a white tiger at Delhi's National Zoological Park Sep 24.

The man, Maqsood from Anand Parbat area in central Delhi, apparently crossed the stand-off barrier and jumped into the enclosure.

Promoted
Listen to the latest songs, only on JioSaavn.com
Maqsood's widow Fatima said the government was liable to pay compensation to the family as there was negligence on the part of the authorities due to which her husband, the only earning member in his family, died.

The plea said Maqsood lost his life because the authorities, upon whom rested the responsibility to take care of the zoo, failed to discharge their duties and they had no emergency or contingency plans to rescue people from such untoward incidents.