Five out of 11 weather stations in Delhi recorded a heatwave on Tuesday. The India Meteorological Department had earlier issued a yellow alert, warning of heatwave conditions. 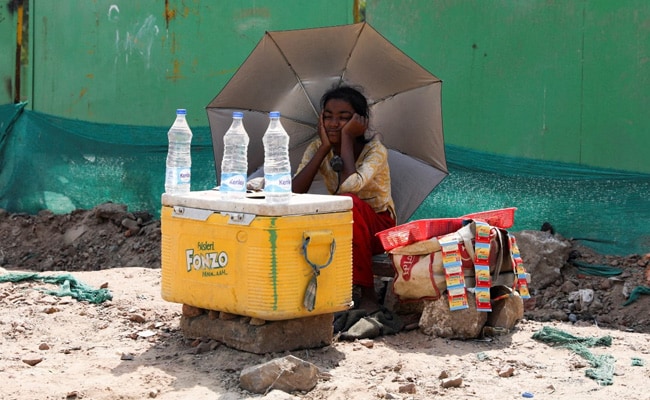 The maximum temperature in Delhi may drop to 40-41 degrees Celsius by Friday. (File)

Many parts of Delhi reeled under a punishing heatwave for a fifth consecutive day on Tuesday, and similar conditions are likely over the next two days.

Weather experts said a fresh western disturbance may bring some relief on the weekend.

At the Safdarjung Observatory, Delhi's base station, the maximum temperature settled at 43.5 degrees Celsius, three notches more than normal.

Five out of 11 weather stations in Delhi recorded a heatwave on Tuesday.

The maximum temperature settled at 46.3 degrees Celsius at Mungeshpur and Sports Complex, making them the hottest places in the capital.

The Met Office had earlier issued a yellow alert, warning of heatwave conditions at isolated places in the capital on Tuesday.

It said the heatwave could lead to "moderate" health concerns for vulnerable people -- infants, elderly people and those with chronic diseases.

"Hence, people of these regions should avoid heat exposure, wear lightweight, light-coloured, loose cotton clothes and cover the head with a piece of cloth, a hat or an umbrella," it said.

There is an "increased likelihood of heat-illness symptoms in people who are either exposed to the sun for a prolonged period or doing heavy work", an IMD advisory read.

Weather experts have attributed the heatwave spell to the lack of strong western disturbances and incessant hot and dry westerly winds.

The maximum temperature in the capital may drop to 40-41 degrees Celsius by Friday.

With the monsoon expected to cover eastern India by June 15, easterly winds will bring in moisture and intensify pre-monsoon activity in northwest India.

Plawat said monsoon is likely to arrive in Delhi around the normal date -- June 27-28, and there is no system in sight which could stall its progress.

A clearer picture will emerge in a week or so, he said.

Last year, the IMD had forecast that monsoon would hit Delhi nearly two weeks before its usual date. However, it had reached the capital only on July 13, making it the most delayed in 19 years.

The monsoon had entered a "break" phase and there was virtually no progress from June 20 to July 8, Palawat recalled.

Based on the absolute recorded temperatures, a heatwave is declared when an area logs a maximum temperature of 45 degrees Celsius.

A severe heatwave is declared if the maximum temperature crosses the 47-degree Celsius mark.