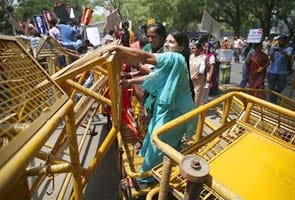 New Delhi: For the fourth day in a row, activists, students and political workers organised protests against the rape of a five-year-old who was kidnapped and tortured by a man who rented a small room in the same building where she lived with her family.

The child is recovering at the All India Institute of Medical Sciences (AIIMS).

Protesters tried to force their way past barricades at Jantar Mantar, the designated area for demonstrations in Delhi. Protesters want to march up to Parliament which has reconvened for the second half of its budget session.

The public anger is reminiscent of the furore that filled the street after the fatal gang-rape of a student on a moving bus in Delhi in December. (Read: Foreign media on sexual assault of children in India) Over the weekend, Prime Minister Manmohan Singh said it is imperative for the police to show "concern and sensitivity while dealing with public anxiety that such incidents generate."

Home Minister Sushil Kumar Shinde in a statement to Parliament has said that an enquiry has been ordered to determine if police officials initially refused to help search for the child, and then offered a bribe to her parents to buy their silence when she was found three days after she was kidnapped.

Two men who belong to Bihar have been arrested for the savage assault.

Promoted
Listen to the latest songs, only on JioSaavn.com
Another group of protestors were at the Police Headquarters, demanding the removal of Police Commissioner Neeraj Kumar.

Traffic jams were reported in some areas near India Gate in the heart of the city.