Case Filed Against Defacing Of VD Savarkar Signboard Inside JNU 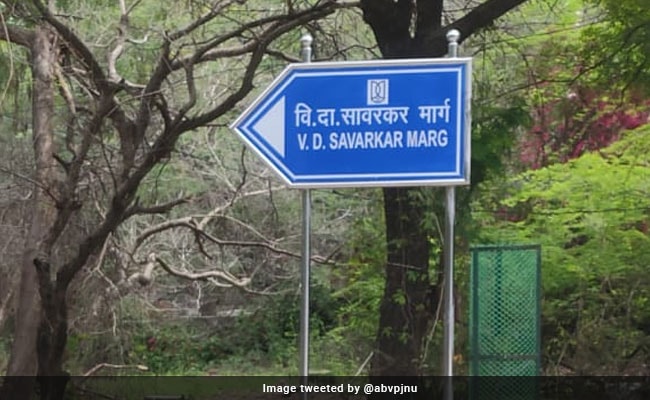 An FIR for ''defacement of public property'' has been filed in connection with the vandalisation of VD Savarkar Marg signage at the Jawaharlal Nehru University (JNU).

"An FIR for defacement of public property has been filed at Vasant Kunj North Police Station in connection with the Jawaharlal Nehru University case in which VD Savarkar Marg signage at the varsity was vandalised yesterday and BR Ambedkar's name was spray painted on it," Delhi Police said.

"We can have disagreements in terms of ideas but defacement is not something that one should indulge in. But unfortunately, some of our students are now damaging public properties. Such things are unwelcome," said Mr Kumar while speaking to ANI.

"The naming of different roads in JNU campus, which is more than 1000 acres, has been approved by the Executive Council based on the recommendations of the campus development committee in 2016. During the last two years, several roads have been named after great personalities. This is highly regrettable," he added.

The VD Savarkar Marg signage at JNU on Monday night was defaced and the name of BR Ambedkar was spray-painted on it.

The university administration has named a road on the campus after Hindutva ideologue VD Savarkar.