The chief minister later told reporters that the Aam Aadmi Party (AAP) government was "investing" in the children for the "country's future". 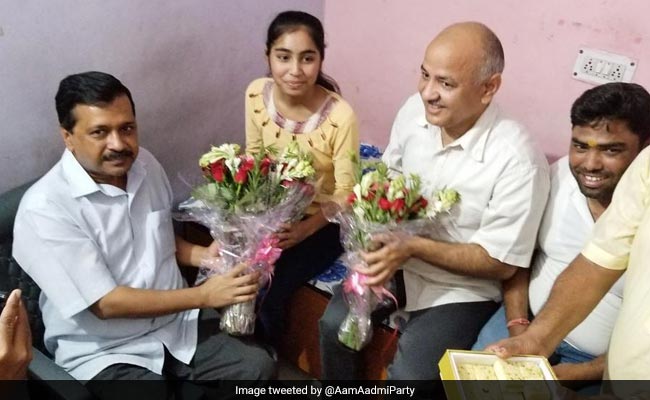 Mr Kejriwal and Mr Sisodia paid a visit to the CBSE Class 12 toppers.

The chief minister later told reporters that the Aam Aadmi Party (AAP) government was "investing" in the children for the "country's future".

His government had doubled the budget for the education sector in its first year, the AAP supremo said, adding that it was an "investment, not an expenditure".

Mr Kejriwal and Mr Sisodia, who is also the education minister of Delhi, paid a visit to the CBSE Class 12 toppers - Bharti Raghav, Prince Kumar, the son of a DTC bus driver, Prachi Prakash and Chitra Kaushik at their respective residences.

They also visited an orphanage in Daryaganj to meet Shahnaz, who has topped the exam in the vocational stream.

"It is like an investment, not an expenditure. We are investing in our children. We are investing for the country's future and we are getting to see the results," Mr Kejriwal told reporters, adding that the AAP government was committed to supporting students.

According to a government official, Kumar topped the science stream with a 97-per cent score, while Kaushik, with 95.6 per cent marks, was the topper in the humanities stream and Raghav and Prakash jointly topped the commerce stream.

Promoted
Listen to the latest songs, only on JioSaavn.com
The pass percentage of the government-aided schools in Delhi was 82.79 this year as against the 80.32 in 2017.

The pass percentage of the private schools was 88.35 this year as compared to last year's 84.20.
Comments
CBSE Class 12th resultClass 12th