Alka Lamba, the former AAP leader who quit Chief Minister Arvind Kejriwal's party to re-join the Congress last year, has been fielded from the high-profile Chandni Chowk constituency ahead of elections in the national capital next month. Ms Lamba, 44, who left the AAP in September after months of bitter differences, will face former colleague Parlad Singh Sawhney and the BJP's Suman Kumar Gupta in her fight to win back the Chandni Chowk seat she was disqualified from on leaving the AAP.

Ms Lamba had been with the Congress for 20 years before she joined Mr Kejriwal's AAP in 2013. In 2015 she won the Assembly election from Chandni Chowk, comfortably beating Suman Kumar Gupta.

Her relation with the party began unravelling soon after, with the AAP's disastrous showing in last year's Lok Sabha polls a particular low point; Ms Lamba upset AAP chiefs by demanding accountability from Arvind Kejriwal and soon after was removed from the official WhatsApp group of party MLAs.

Other points of conflict with the party included the 2018 resolution to revoke former Prime Minister and Congress leader Rajiv Gandhi's Bharat Ratna. At the time she had said she was ready to face any punishment for defying party leaders on the issue. 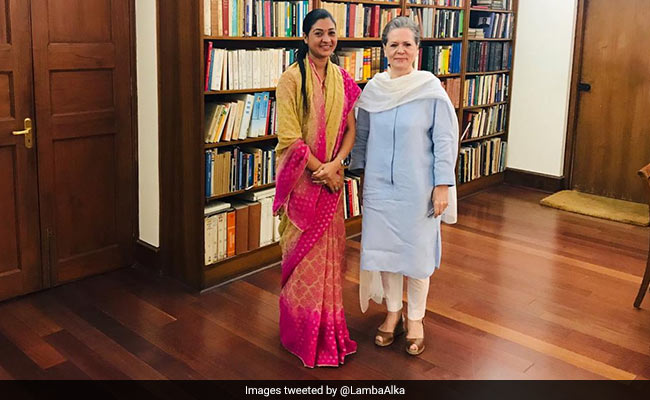 When she did eventually walk away from the AAP it came as no surprise. Last year she had even said she would contest the Delhi election as an independent candidate.

"The time has come to say 'Good Bye' to #AAP and to resign from the primary membership of the party. The past six years' journey was a great learning for me. Thanks to all," Alka Lamba tweeted on after her acrimonious exit from the party.

The time has come to say
"Good Bye" to #AAP and to resign from the primary membership of the Party.
The past 6years journey was a great learning for me.

"I am very happy that the Congress party has again accepted me as its member. Though I was away from the party, I could not get separated from its ideology," she told news agency ANI after re-joining.

Shortly after she confirmed her Congress return Alka Lamba was disqualified from the Delhi Assembly "on grounds of defection". The petition was moved by AAP MLA Saurabh Bhardwaj.

The AAP is seeking re-election in next month's polls after recording a massive win in 2015 elections; the party won 67 of 70 seats, with the remaining three going to the BJP and the Congress, which had been in power between 1998 and 2013, drawing a blank.