During the investigation, police checked over 700 CCTV footage from last seven days when the incident took place and also gathered local intelligence near the spot. 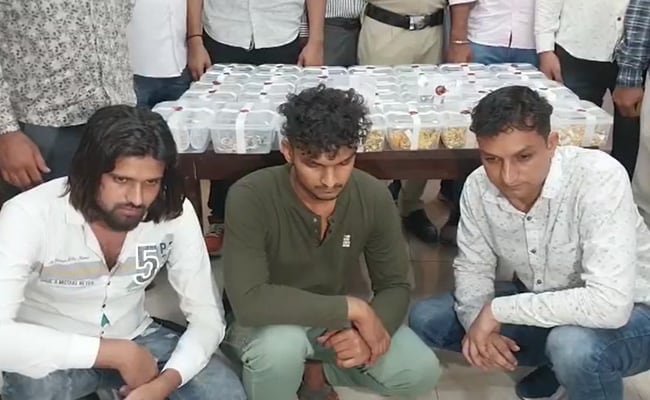 Jewellery worth Rs 6 crore was robbed after throwing chilli powder in the victims' eyes.

Police have arrested three people with the help of Paytm transaction from Rajasthan for allegedly robbing two men in Delhi's Paharganj area, officials said on Friday.

The two had robbed the men of jewellery worth Rs 6 crore after throwing chilli powder in their eyes.

The accused have been identified as Nagesh Kumar (28), Shivam (23), and Manish Kumar (22), all residents of Najafgarh, they said.

A video of the incident is being circulated on social media.

In the video, two men, one in police uniform, can be seen walking on a street. After a point, they stop two persons. In the meantime, two more men join them. They then throw chilly powder in their eyes and run away with the parcel.

Police received information regarding the incident on Wednesday.

Complainant Somveer said he works as a delivery boy at a parcel company in Chandigarh, police said.

On Wednesday around 4.15 am, he, along with his colleague Jagdeep Saini, picked up the parcels from their office in Paharganj and was going towards DBG road.

When he reached near Millenium hotel, they saw two people already present there, a senior police official said.

One of them was wearing a police uniform, they said, adding that he asked for their bags for checking.

Meanwhile, two more persons came and they threw chilli powder in their eyes and threatened them to hand over the bag to them or else they will kill them. The accused robbed their parcels consisting of jewellery and fled from there, police said.

During the investigation, police checked over 700 CCTV footage from last seven days when the incident took place and also gathered local intelligence near the spot. The activities of four persons near the spot appeared suspicious, the officer said.

It was found that the accused were talking to a cab driver and one of them had transferred Rs 100 to the account of the driver through Paytm in exchange for cash for buying tea, Deputy Commissioner of Police (central) Shweta Chauhan said.

The transaction was analysed and the culprits were identified as the residents of Najafgarh, she said.

Police found that the accused had gone to Rajasthan. A team was sent to Jaipur and three persons were arrested.

A total of 6,270 grams of gold, three-kilogram silver, 500 grams of gold deposited in IIFL, and 106 raw diamonds with other diamond jewellery all worth Rs 5.5 to six crores were recovered from their possession, the DCP said.

Further, efforts are being made to identify the remaining culprits.

Nagesh, the mastermind of the robbery, planned to commit the crime with his friends and maternal uncle, they added.