The car was registered in the name of Arun Kumar, following which he and his friend Pardeep were arrested, an officer said. 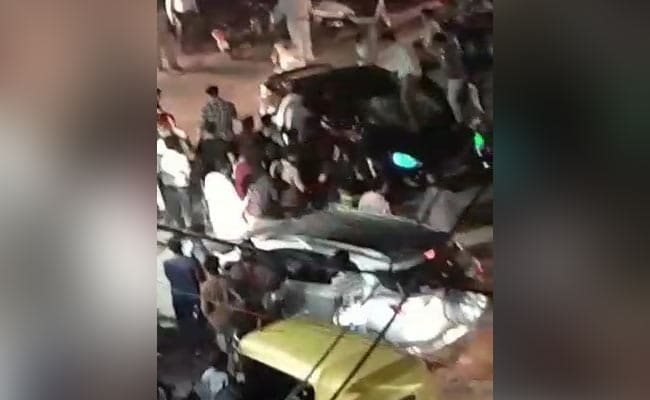 Police analysed the CCTV footage of the area and furnished the registration number of the vehicle.

Two men were arrested on Tuesday for allegedly ramming a car into a crowd on a busy road in northwest Delhi's Model Town area, police said.

The video of the Sunday night incident, which went viral on social media, purportedly showed a black sedan car speeding through the crowd on a busy road in Old Gupta Colony of the area.

In the video, the driver is seen arguing with locals while driving through the crowded area. The driver then suddenly accelerated the car in reverse direction into the crowd, injuring one person.

Based on a statement of the victim, Kamal Arora, police registered a case under sections 279 (rash driving or riding on a public way) and 337 (causing hurt by act endangering life or personal safety of others) of the Indian Penal Code, a senior police officer said.

Police analysed the CCTV footage of the area and furnished the registration number of the vehicle, he said.

The car was registered in the name of Arun Kumar, following which he and his friend Pardeep were arrested, the officer said.

During interrogation, Arun Kumar told police that the accident took place when he and his friend were returning home after having dinner at a restaurant in Hudson Lane, the senior officer said.

Later, police added sections 308 (attempt to commit culpable homicide), 201 (causing disappearance of evidence of offence, or giving false information to screen offender) and 34 (acts done by several persons in furtherance of common intention) of the IPC and section 184 (driving dangerously) of the MV Act in the First Information Report, he said.

Police were trying to ascertain whether Arun Kumar was under the influence of alcohol at the time of the accident, he added.