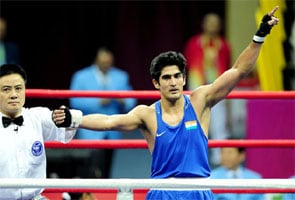 The selection of the team for both Commonwealth Games and the Asian Games was done after three-day trials in Patiala.

The 24-year-old Vijender, who became India's first Olympic and Word Championships medallist by clinching bronze in the events, will be a part of the Indian team in both the Commonwealth and the Asian Games, scheduled November 12 to 27 in Guangzhou, China.

"The last time I competed in the Commonwealth Games, I got a silver, and had to settle for a bronze in the previous Asian Games but this time I am aiming for the gold," the world number one told PTI.

The 28-year-old Akhil, however, has been replaced by South Asian Games gold medallist and reigning national champion Chhote Lal Yadav in the team for the Asian Games.

"The team for the Asian Games differs in only three names. Chhote comes in for Akhil, V Santhosh Kumar comes in for Manoj Kumar in 64kg and Vikas Krishan comes in for Jai Bhagwan in 60kg.

That is because these three boys did very well in the trials. Chhote, Vikas and Santhosh were very good and they deserved to be given a chance," Indian Boxing Federation's Secretary General P K Muralidharan Raja said.

"Akhil, for all the injuries he has battled, was phenomenal during trials. He beat everybody to pick himself for the Commonwealth Games but Chhote was good and deserved to be in the team. So, there is no question of Akhil being ignored or sidelined for the Asian Games," he added.

On being left out of the Asian Games, Akhil, who would be participating in the World Series of Boxing after the Commonwealth Games, said, "It is upto the selection committee. I will compete in the events I am selected for."

A total of 44 boxers from the CWG Core Group participated in the trials, which were for the first time held like a full fledged Championship with International referees and judges assisting the seven-member Selection Committee and Jury to pick the boxers.

Except for the 18-year-old Vikas, a world youth champion and a bronze medallist from the inaugural Youth Olympics, making the Asian Games cut ahead of the more experienced Commonwealth champion Jai Bhagwan, both the teams offer hardly any surprises.

"Vikas reached for the trials on the same day he landed in India after the Youth Olympics and he still managed to put up a good show. He holds tremendous promise for the future," said Col Raja.

Apart from the trials, the other selection criteria included previous performances at major international competitions and national championships.

The immensely successul Suranjoy Singh, who won six international gold medals in the past one year, was the hands down favourite for the fly weight 52kg category and he lived upto the expectation during the trials.

Akhil, an Olympic quarterfinalist, beat off stiff competition from Chhote and his own protege Jitender Kumar to get selected for the Commonwealth Games.

The world number one Vijender was expectedly the top pick in the middle weight category while this year's Arjuna awardee and Commonwealth champion Dinesh Kumar (81kg) also made the squad for both the events.

Manpreet Singh (91kg) and Commonwealth champion Paramjeet Samota (+91kg) have also been included for both the Commonwealth and Asian Games.

Olympian Rathore out of CWG race