Voting is progressing peacefully with no untoward incident reported so far from anywhere in the constituency in coastal Kendrapara district, the official said. 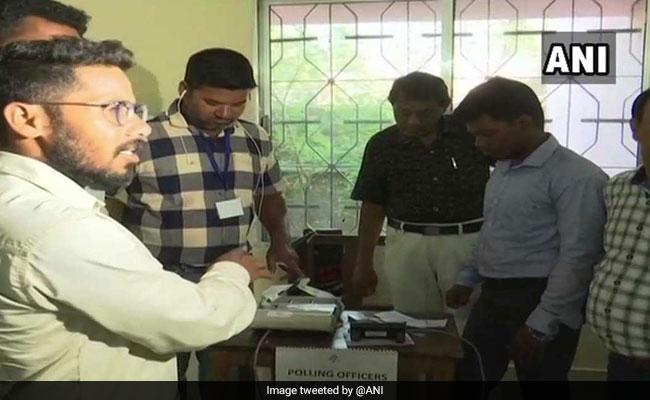 Polling to Odisha's Patkura assembly seat got under way at 7 am on Saturday, after being postponed twice in the past few months, an official said.

An estimated 12 per cent of the over 2.44 lakh electorate exercised their franchise during the first two hours of polling, he said.

Voting is progressing peacefully with no untoward incident reported so far from anywhere in the constituency in coastal Kendrapara district, the official said.

The constituency is witnessing an interesting political battle with Odisha Chief Minister Naveen Patnaik's bete noire, Bijoy Mohapatra of the BJP, locked in a fight with BJD nominee, Sabitri Agarwal.

Bijoy Mohapatra, a four-time legislator and one of the founders of the BJD, was ousted from the party by Naveen Patnaik just before the 2000 assembly polls.

Since then, he has not been able to make it to the state assembly.

While there are 10 candidates in the fray, it is likely to be a straight fight between the BJD and the BJP.

Sabitri Agarwal, fielded by the BJD, is the wife of former Patkura legislator Bed Prakash Agarwal, whose demise on April 20 had first led to postponement of polling.

Later, it was scheduled on May 19 but had to be deferred again in the aftermath of cyclone Fani, which barrelled through coastal districts of Odisha on May 3.

A total of 2,44,747 voters, including 1,17,306 women, are eligible to exercise their franchise in the election for which 1,700 polling personnel have been deployed.

Voting was delayed in some booths due to glitches in Electronic Voting Machines (EVM), which were corrected with immediacy, a polling official said.

Elaborate arrangements have been made to conduct free and fair election in 309 polling booths, including 138 identified as critical, he said.

Security personnel, including Central Armed Police Forces (CAPF) jawans, have been deployed in the polling stations to maintain law and order, while 40 CCTV cameras installed at various booths.

Arrangements have also been made for web casting in 31 polling stations and videography in 15 places, while 52 micro observers were pressed into service, the official said.

Counting of votes is scheduled to be held on July 24.