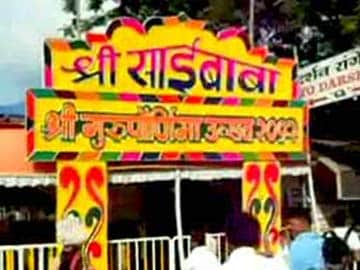 The Shri Sai Baba Sansthan Trust (SSST) has decided to levy Rs.500 per head for the morning (4.30 a.m.) Kakad Aarti from those devotees who prefer to skip the general queue.

Shirdi: From Monday, devotees opting for VIP passes at the Shirdi Sai Baba Temple in Shirdi will have to pay extra for attending all the four 'aartis' of the day, an official said.

"Starting Monday (Nov 18), the Shri Sai Baba Sansthan Trust (SSST) has decided to levy Rs.500 per head for the morning (4.30 a.m.) Kakad Aarti from those devotees who prefer to skip the general queue," an official told IANS on Sunday.

People opting to await their turn in the general queues would be allowed free access to the aartis - the prayers - the SSST official Ajay More.

In 2010, the trust implemented the paid pass system for the aartis only on Saturdays and Sundays, which now will be extended to all weekdays from Monday.

Besides the VIP passes for aartis, the SSST levies Rs.100 per devotee for VIP darshan on Saturdays and Sundays, which will not change, More added.

He explained that the new daily VIP aarti passes are being implemented on experimental basis to reduce the rush of devotees inside the Saibaba temple premises and to avoid the risk of stampede.

With a likely fall in the number of people availing the VIP aartis passes and consequent reduced rush, the trust management hopes more commoners will get a chance to see participate in the four aartis.

Sai Baba, who lived and preached in Shirdi and surrounding regions during the late 19th and early 20th century, took "Samadhi" on October 15, 1918, 95 years ago in Shirdi, the small town near Nashik.

Ranked among the top three richest temple trusts in the country, the SSST earns around Rs.5 million daily in offerings and donations.

Promoted
Listen to the latest songs, only on JioSaavn.com
On an average, around 60,000 devotees visit the temple daily, and the crowds are more than double on weekends, and five times during festivals and special occasions.