"I have not seen such a huge snake, about 19 feet long, in my life," snake rescuer Krushnachandra Gacchayat said. 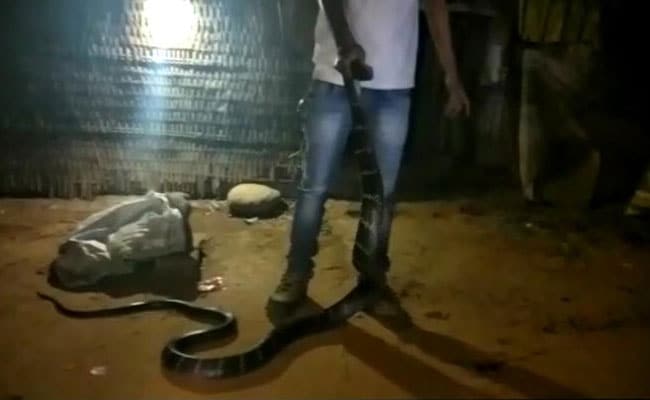 A rare 19 feet King Cobra was rescued in Odisha from a villager's home in Mayurbhanj district.

Ruhia Singh from Balipal village jumped out of his bed when he spotted the cobra in his room and raised an alarm.

The villagers gathered and the Sarpanch was called in. The rescuer from the forest department was unable to get hold of that giant cobra and snake rescuer Krushnachandra Gacchayat was informed, reports news agency ANI.

Mr Gacchayat said that he flinched at first but when he saw that villagers were about to kill the snake, he mustered the courage to rescue it.

#WATCH: Krushna Chandra Gacchayat, says,"I got a call that a snake has entered a house. As I reached there I was shocked to see such a big King Cobra, it was more than 19 feet. People were shocked and ready to kill it. I rescued the snake and released it in the jungle." pic.twitter.com/WysEUzz4oZ

"I have not seen such a huge snake, about 19 feet long, in my life. Felt good after rescuing it and released it in Simlipal National Park," he told news agency ANI.

Snake spotting is not uncommon in Odisha.

In October, venomous Russel Viper was spotted near a school in Baripada and was rescued and released in jungle by Mr Gacchayat.