Russel's Viper snake rescued near Odisha school was 4-feet long and weighed about 3 kg. It was probably stuck in the net for 8-10 days, the snake rescuer said. 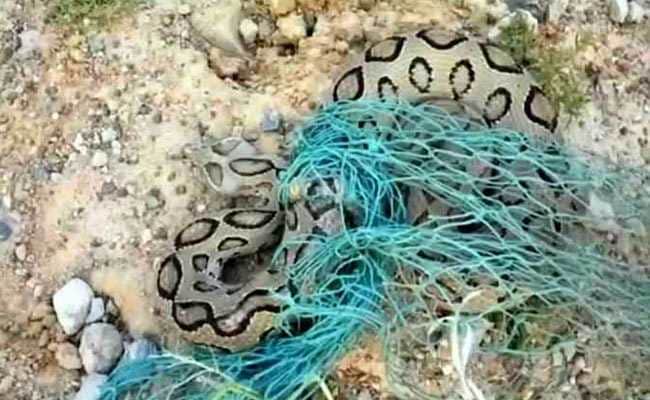 It was a nightmare for a group of children in Odisha when they spotted a 4-feet long venomous snake "making sounds" near their school in Baripada. The snake, children said, was stuck in a fishing net and was unable to find its way out. In panic, they threw stones at him and raised an alarm.

Mr Gochhayat identified the snake as "Russel's Viper", locally known as chandroborha, which he says is an aggressive snake with a deadly venom. It is responsible for causing the most snakebite incidents in the country and its bite can lead to death. "When I reached the spot, I found a 4-feet long snake entangled in the fishing net and hissing violently. It weighed about 3 kg and was probably stuck in the net for 8-10 days," he said.

Russel's Viper was rescued and later released in a "safe habitat" in a jungle nearby by Mr Gochhayat.

In June, 111 baby cobras and 20 eggs were found in a labourer's mud house in Paikasahi village in Odisha. Forest officials and snake catchers helped remove the tiny but highly venomous snakes from their home. The baby cobras were released into their natural habitat, away from human habitation, say forest officials.