Rajasthan: The driver of the machine lifts the bucket up and the village head Rekha Devi rises off the ground with it. She hangs in the air for a while before the driver releases the bucket down. 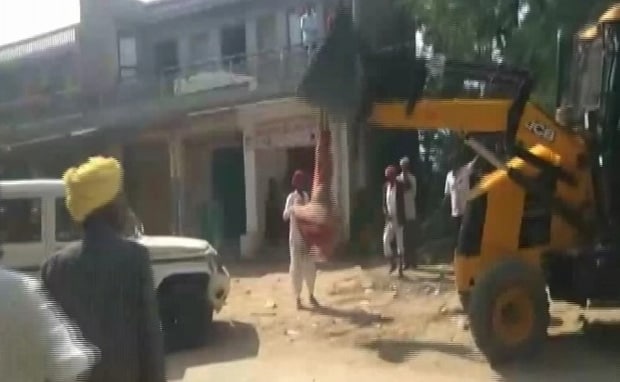 A village head dangles on a JCB machine in an attempt to stop an alleged encroachment in Rajasthan.

In a video that is being widely circulated online, Rekha Devi, the village head of Mandawala village, attempts to climb on the loader bucket of the JCB machine. The driver of the machine notoriously lifts the bucket up and the village head rises off the ground with it. She hangs in the air for a while before the driver releases the bucket down and villagers run to rescue her.

"The driver first tried to run the JCB over me. He then hit my car when I and the village ward head Harki Devi were inside it," Rekha Devi told news agency ANI.

"The land belonging to the Gram Panchayat was illegally encroached earlier also .The encroachment was removed in August, but now there is an attempt to encroach the land again. I reported to police about the matter but no action was taken," she added.

The land was allegedly encroached by Vagha Ram and the illegal encroachment was removed in August by Gram Panchayat Mandawala. He again began to construct there, a move Rekha Devi opposed.

According to the police, the accused is on the run and they are trying to trace him.

"Sarpanch Rekha Chowdhury had filed a complaint against encroachment and we have registered the case. JCB also hit her vehicle. Efforts are being carried out to catch Vagha Ram. The action will be taken," said police officer Jaidev Singh.