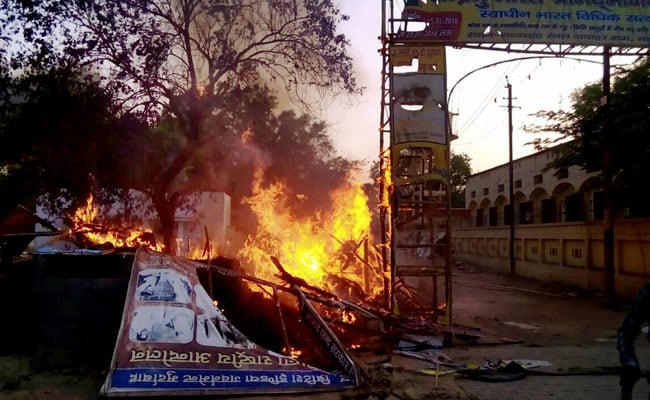 24 people including 2 police officers were killed in Mathura clashes.

Mathura: Crime branch of Mathura police has filed chargesheet against 104 people, including the Jawahar Bagh encroachers' spearhead and a woman, for the murder of two police officers during an eviction operation on June 2.

The then Superintendent of Police city (Mathura) Mukul Dwivedi and the then Station House Officer Farah Santosh Yadav were killed when the police were evicting encroachers, led by Ram Vriksha Yadav, from the Jawahar Bagh.

"During investigation, 104 people including the kingpin Ram Vriksha Yadav were, found guilty of assassination of the then SP city (Mathura) Mukul Dwivedi and the then SHO Farah Santosh Yadav," Superintendent of Police (crime) Rajesh Sonkar said.

Of the 104, three persons, including Mr Yadav and his two associates, were killed during the operation. He said the chargesheet was filed in the court of ACJM Radhey Mohan Srivastava yesterday in the presence of all the 101 accused.

"All the accused, including Poonam Bose, wife of Chandan Bose (self-styled army commander of Ram Vriksha) would be presented before the CJM on September 19, when charges framed against them would be read," Mr Sonkar said.

The case would be finally transferred to the court of sessions judge, he said.

"Twenty-six people, including the two officers, were killed during the operation," he said, adding the accused have been booked under various sections of relevant law.

Mr Sonkar said nine police personnel who had "fled" when Mr Dwivedi was attacked, have already been suspended, as prima facie they were found guilty.

"While 101 people have been named charge sheet for murdering two police officers, earlier 278 were booked and sent to jail then (in the immediate aftermath of the incident)," Kunvar Singh Yadav, Inspector Crime Branch said. Meanwhile, the single-member judicial commission chaired by retired high court judge Mirza Imtiaz Murtaza is recording statements of witnesses.

Promoted
Listen to the latest songs, only on JioSaavn.com
"So far over 65 people have recorded their statement, on oath," Pramod Kumar Goel, secretary to the commission said. The next date for recording the statements would be fixed after September 15, he concluded.